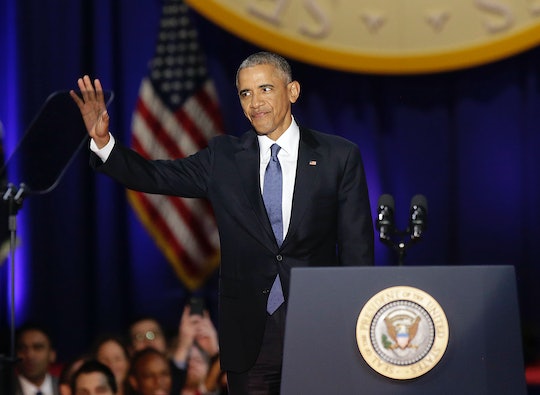 To a packed hall of proud yet sorrowful supporters, President Barack Obama delivered a remarkable speech to close out his presidency. Obama's best quotes from his farewell address run the gamut — some are funny, others inspirational, some are just too real, but they all reminded audiences what a strong yet compassionate leader looks like. And, like all his speeches, they made us all reconsider what's important, not only in a president, but in what our nation values, too.

Obama's supporters were rowdy and impassioned while listening to him speak; offering shouts, boos, and groans where they deemed fit. Rather than bash the incoming president-elect, though, Obama took the high road instead and stressed the need for a peaceful transition of power from him to Trump, regardless of personal opinion. Despite all the pessimism and doubt that's circulated around a Trump presidency, Obama's message has continued to be one of hope and support for the president-elect, trusting in democracy and the power of the American people as vehicles for which to promote positive change.

Compounding graciousness, forward-thinking, and a constant search for both truth and justice, Obama sealed his presidency with class. Here are some of Obama's best farewell address moments, as recorded by Twitter:

Leaving with one of the highest approval ratings of a United States political figure, Obama has won over citizens with his calm demeanor, level-headedness, and focus on the issues— characteristics that greatly distinguish him from the incoming president-elect. Obama ended his speech reminding audiences how hard our citizens have worked to create the free country we're all working toward improving, saying:

I am asking you to hold fast to that faith written into our founding documents; that idea whispered by slaves and abolitionists; that spirit sung by immigrants and homesteaders and those who marched for justice; that creed reaffirmed by those who planted flags from foreign battlefields to the surface of the moon; a creed at the core of every American whose story is not yet written: Yes We Can. Yes We Did. Yes We Can.

Before Obama's presidency, Americans thought a lot of things weren't possible. Many thought that same-sex marriage would not happen in their near futures — or maybe even in their lifetimes. They never thought that a woman could run for president and amass 3 million more votes than her male opponent. They never thought a sitting president would call himself a feminist. But all of those things happened, and Obama's speech on Tuesday night reminded Americans of that, and of their potential, still, in the future. Obama helped remind Americans that things might seem bleak, but they always, always have the power to make them better.