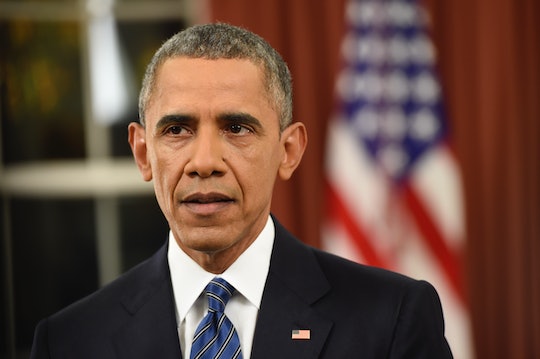 Less than a week after the terrifying attack at the Inland Regional Center in San Bernardino, California, during which 14 people were killed and at least 21 more wounded, President Obama delivered an address on terrorism in the Oval Office — the first of its kind since 2010. Speaking from the White House on Sunday, Obama gave clarity to many of the lingering questions our nation has had since the horrific shooting. He admitted it's still too soon to say whether or not shooting was an act of terrorism conceived by ISIS, but promised the American public that the U.S. will destroy the threat the organization poses. But there was another big threat his speech touched on — Obama also talked about "gun safety" during his address.

Obama did confirm that the attack in San Bernardino was an act of terrorism in a broader sense of the word, though he was clear to remind those watching and listening that the U.S. has yet to determine if the attack was carried out at the behest of a larger network. But he also made sure to address one major issue our nation faces right at home: President Obama called for stricter gun laws throughout the United States, specifically laws that would make it harder for people on the no-fly list to obtain firearms, as well as laws that would make it harder for individuals to own powerful assault weapons. His words were incredibly heartfelt, passionate, honest, and true — but, sadly, it's hard to believe they will change much.

The deadly shooting that took place at the hands of alleged attackers Syed Farook and Tashfeen Malik was a reminder of just how lax Americans gun laws are. It's laughable — and I use that word because, at this point, frankly, if I don't laugh, I will cry — that anyone, regardless of their race, ethnicity, gender, sexual orientation, and state of residence, could buy a powerful assault welcome on the Internet. What's more laughable? There is a mass shooting — on average — that takes place every day in our country. It is downright mind-boggling that people are killed every day because of gun violence. Every. Day. In 2015, the fear of dying at the hand of an individual who was able to purchase powerful, deadly assault weapons in bulk online is common — a terrifying thought that rushes through Americans' minds every day.

Obama's message Sunday was important, one and that needs to be heard time and time and time again until we are able to change the violent direction America is headed in. But, with limited time left in office, Obama won't be able to do much more than lobby the American people to fight for stricter gun laws. His speech was, in some ways, a major dose of side eye to the House of Representatives and the Senate. There's only so much a president can do when he doesn't have the backing and the full support of the other two governing entities that put laws into effect. And Obama's speech was a reminder of the real issue: Our divided politics.

There are several steps that Congress should take right away. To begin with, Congress should act to make sure no one on a no-fly list is able to get a gun. What could possibly be the argument for allowing a terrorist suspect to buy a semi-automatic weapon? This is a matter of national security. We also need to make it harder for people to buy powerful assault weapons like the ones that were used in San Bernardino. I know there are some who reject any gun safety measures. But the fact is that our intelligence or law enforcement agencies — no matter how effective they are — cannot identify every would-be mass shooter, whether that individual is motivated by ISIL or some other hateful ideology.

Obama is no doubt frustrated. After all, as of Oct. 2, President Obama had given 11 different speeches on gun violence. Eleven. And on Sunday evening, less than an hour after Obama had given yet another speech, Donald Trump fired back:

Is that all there is? “We need a new President – FAST!

Not quite the cooperation Obama called for in his speech.

And gun control is a measure that needs united support. Especially when there are people who will walk into work tomorrow — or into their healthcare facility or into their church or their mosque or their synagogue or their school or a movie theater — and never be able to do and be and achieve all the dreams and hopes they'd laid out for themselves.

Hell, it's not unreasonable at all.