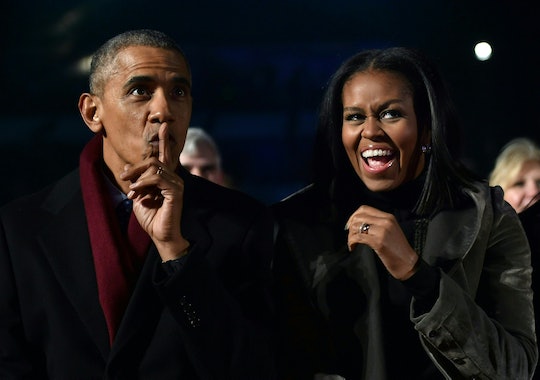 Obama's Final Christmas Message Is All About Love

On Saturday, President Obama and the first lady shared a video of them wishing the country a happy holiday season. The Obama's final Christmas message wasn't just a simple holiday greeting, but a look back at the Obama presidency, a tribute to the military, and a chance for the president to sneak in one final "dad joke." The video begins with Mrs. Obama explaining that her husband needs help with these videos. They showed a clip of the very first holiday address from the couple, in which the president breaks down laughing while the camera rolls.

"Pull it together, POTUS," the first lady chided him back in 2009. These two, right?

Mrs. Obama began listing all the unofficial milestones reached in two presidential terms, like the 200,000 holiday cookies the White House pastry chefs have cooked and the endless corny jokes the president tells. "Yes, some of them got a...Frosty response," the president joked.

"One last joke," the first lady responded, shaking her head at her husband's cheesy sense of humor. We feel you, Michelle.

But the message wasn't all about corny jokes and delicious cookies. Obama also took a moment to look back at his past eight years in office.

"Together, we fought our way back from the worst recession in 80 years, and got unemployment to a nine-year low,” he said. “We secured health insurance for another twenty million Americans, and new protections for folks who already had insurance.We made America more respected around the world, took on the mantle of leadership in the fight to protect this planet for our kids, and much, much more," he added.

They then spoke about their Christian faith and how they hope the story of Christmas can inspire Americans to play nice with each other. "And as we retell his story from that Holy Night, we’ll also remember his eternal message, one of boundless love, compassion and hope," the president said.

Mrs. Obama chimed in by adding that she hopes Americans of all faiths can take the Christian message of loving thy neighbor seriously, "no matter where they come from, or how they practice their faith.” She added that "the idea that we are our brother’s keeper and our sister’s keeper. That we should treat others as we would want to be treated," should be on everyone's to-do list, no matter the holiday they celebrate.

The first lady also asked Americans to go to JoiningForces.com and find out how to support the military and their families, not just during the holidays, but all year round. "Many of our troops are far from home this time of year, and their families are serving and sacrificing right along with them. Their courage and dedication allow the rest of us to enjoy this season," she reminded Americans.

Although we might not miss his dad jokes, Obama doesn't hold it against us. He said, "the greatest gift that Michelle and I have received over the last eight years has been the honor of serving as your President and First Lady." Mrs. Obama added, from the whole family, including Bo and Sunny, "we wish you and your family a happy and healthy 2017."

Right back at you, Obama family.