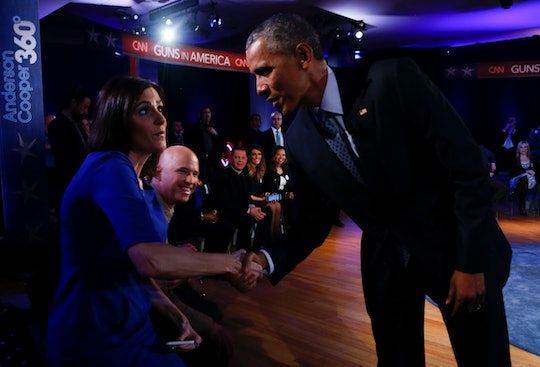 At Thursday night's town hall conversation hosted by CNN, President Obama sat down with Anderson Cooper to discuss his new executive actions on gun control. The floor was open to people pitted on both sides of the issue, and the women who spoke had some serious questions for the president about gun reform. By the end of the night, one thing was clear: the heartbreaking stories and hard-hitting questions at Obama's gun control town hall proved that women are seriously invested in the hot button issue.

Taya Kyle, widow of former U.S. Navy Seal Chris Kyle, shared a sentiment that many women know well. She wanted to have hope, Kyle told the president — she was searching for it — but the actions the president had proposed didn't give her hope. Instead, Kyle said she felt uncertain that these background checks would have prevented previous tragedies and was uncertain that anything could be done to stop someone with no moral code.

"The laws that we create don't stop these horrific things from happening, right?" Kyle questioned. "That's a very hard pill to swallow."

Kimberly Corban, a rape survivor and mother of two, was up next, questioning the president on why he was pushing for legislation that would make it more difficult for law abiding citizens such as herself to protect their families. Corban explained that she felt what so many mothers felt when they looked at their children: fear and a primal need to protect. The new gun control measures didn't make her feel safer either, she explained. In fact, it was just the opposite.

However, as the president pointed out on Thursday, the new proposed gun measures will likely not infringe upon Corban and Kyle's ability to own the firearm of their choice or stop them from carrying a concealed weapon. Obama's new executive action to push forward with gun reform mostly consists of tightening existing laws. In reality, the president's executive actions will expand background checks to build a more effective database and are meant to cut down on irresponsible internet firearm sales by closing the "gun-show loophole" and eliminating the exemption most small-sellers are granted from keeping formal sale records. In addition to these measures, Obama also seeks to expand funding for mental health, an issue many gun rights advocates cite in their arguments against increased gun security measures.

But these measures didn't seem to satisfy Cleo Pendleton, whose daughter Hadiya, an honor student, lost her life to gun violence at the age of fifteen. At Thursday's town hall, Pendleton said that she wanted to know how Obama would help stop gun trafficking from states with loose gun regulations into areas with stricter gun control laws — a major problem plaguing her hometown of Chicago.

The president acknowledged that this system was not foolproof, but offered it as a starting point. While there were potential pitfalls and bureaucratic red tape that would make life more difficult for a few good Americans, Obama reminded the crowd that this was a small sacrifice to make:

"The fact that the system doesn't catch every single person...has to be weighed against the fact that we might be able to save a bunch of families from the grief that some of the people in this audience have had to go through."

Mothers on both sides of this issue seem to want the same thing. They want to feel safe and secure and confident in their ability to protect their children. Both sides feel frustrated. The overwhelming response from both sides at Thursday's town hall seemed to be this: it's not enough.

I hear their frustration. I feel it too. I fear for my kids' safety. I worry about shootings in a way that makes me sick to my stomach. I don't feel like this is enough either, but we have to start somewhere, as the president said. It is not enough to throw up our hands and say nothing can be done. Something must be done, and it must be done now.

President Obama closed the evening with a message that brought home what this executive action was really about, making a change that will leave our children with a brighter future. The road to decreasing gun deaths will be a long one, but it is time to take the first step.

"We're not going to prevent all of it, but we can do better."