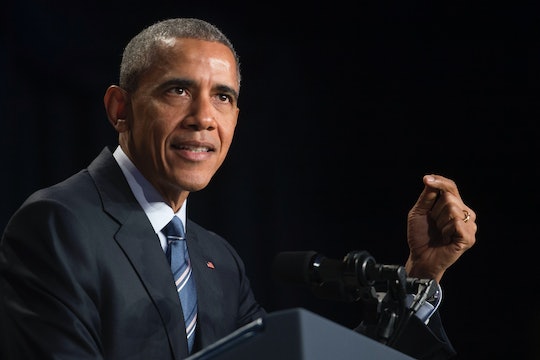 On Thursday morning, President Barack Obama, members of Congress, and evangelical Christians gathered together for the National Prayer Breakfast in Washington D.C. Each year since 1953, each sitting president has been invited to speak at the annual forum on faith in public office. Obama’s National Prayer Breakfast speech, the last of his presidency, continued Obama’s recent push to promote religious liberty and tolerance, according to ABC News. Obama also recently visited a mosque to combat Islamophobia. While religious tolerance might seem like a universal message, not everyone has had a positive reaction to Obama’s words. But that might be exactly why they’re so necessary.

Since late January, Obama held three events focused on defending religious freedoms, ABC News reported. On Jan. 27, Obama attended the Righteous Among Nations Awards ceremony at the Embassy of Israel. And on Wednesday, he visited a U.S. mosque for the first time in his presidency. Each time, the president’s planned remarks called on people of various religions to respect each other, using examples of people of Jewish, Muslim, and Christian faiths working together to drive home themes of leadership and kindness. Speaking at the bipartisan and non-denominational event on Thursday, Obama expressed how his own faith has been important to his strength as a world leader.

Obama went on to call faith "the great cure for fear" and described the corrosive effects of fear as the opposite of faith. He warned the audience about how common — and destructive — fear can be to a community, according to live video of his speech Thursday:

And fear does funny things. Fear can lead us to lash out against those who are different or lead us to try to get some sinister ‘other’ under control. Alternatively, fear can lead us to succumb to despair, or paralysis, or cynicism. Fear can feed our most selfish impulses and ruin the bonds of community. It is a primal emotion, fear, one that we all experience. And it can be contagious, spreading through societies, through nations. And if we let it consume us, the consequences of that fear can be worse than any outward threat.

Obama praised members of the faith community worldwide for putting aside religious differences to aid in times of crisis, such as after the recent mass shooting in San Bernadino, the church shooting last year in Charleston, South Carolina, and the ongoing water crisis in Flint, Michigan. In his remarks, Obama condemned those who persecute people for their religious beliefs, including Christians, before going on to talk about the treatment of religious minorities in the U.S.

That message has been a sticking point for Obama’s opponents recently. Reacting to a similar statement made during Obama’s speech at the Islamic Society of Baltimore on Wednesday, presidential candidate and Florida Sen. Marco Rubio said that message was “hurting our country badly,” according to The Hill. “He gave a speech at a mosque, basically implying that America is discriminating against Muslims,” Rubio said. “Of course there’s discrimination in America, of every kind. But the bigger issue is radical Islam. This constant pitting people against each other, I can’t stand that.”

Oddly, Rubio didn’t say anything about the divisive messages from GOP candidates demonizing Muslims and Muslim-Americans. According to ABC News, while visiting the mosque in Baltimore, Obama denounced the anti-Muslim rhetoric that has taken over the race between Republican presidential hopefuls — specifically billionaire Donald Trump’s proposal to ban Muslim immigration and the GOP candidates’ push to block aid to Syrian refugees:

We’ve seen too often people conflating the horrific acts of terrorism with the beliefs of an entire faith. And of course recently we’ve heard inexcusable political rhetoric against Muslim Americans that has no place in our country.

So for anyone keeping track, calling on people to treat Muslims like anyone else might sound like a positive, unifying message. But it's the wrong move for a sitting president, at least, according to Rubio. I know, it sounds completely absurd. And yet, here we are.