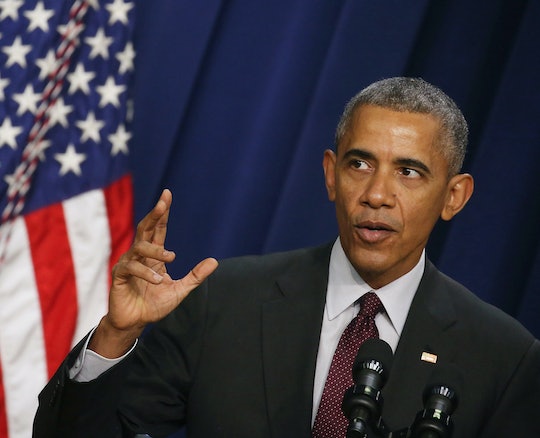 On Friday, President Barack Obama announced rules to help close the gender pay gap, and feminists and women's rights activists across the country rejoiced while sharing the collective sentiment that it's about damn time he made this kind of move. The rules will require companies to report to the federal government what they pay employees, broken down by the employees' race, gender, and ethnicity, according to the New York Times. In 2014, women with comparable experience and backgrounds were paid 79 cents for every dollar that their equal male coworkers made, according to ABC News. The pay gap is worse for women of color — 64 cents for black women an 56 cents for Latina women — and mothers, who have to work 18 months to make what fathers make in just one year.

Obama's announcement comes on the seven-year anniversary of the day he signed the Lilly Ledbetter Fair Pay Act into law, according to The Atlantic. Lilly Ledbetter allows employees to file lawsuits up to 180 days after they receive an allegedly discriminatory paycheck, according to the Atlantic. (Yes, this is a law that only came into existence in 2009. *Cue eye roll*) The new rules that Obama announced Friday will be called the Paycheck Fairness Act, and Obama called Congress to have it passed.

In an announcement about the proposal, Obama said the move was necessary for gender equality, according to the Times:

Women are not getting the fair shot that we believe every single American deserves. What kind of example does paying women less set for our sons and daughters?

As if that quote isn't enough to get people on board, Obama's proposed regulation was jointly published by the U.S. Equal Employment Opportunity Commission and the Department of Labor, according to the Atlantic. Jenny Yang, the chairwoman of the Equal Employment Opportunity Commission, told the Times that the proposal will help the government better enforce equal pay laws that are often difficult to keep tabs on:

Many Republicans have been critical of Obama's attempts to address the pay gap. They say that gender discrimination is already illegal and that women can sue their employers if they believe they are being discriminated against. What Republicans don't seem to understand is that these lawsuits are expensive, and the women are already suing their employers for lack of pay. Additionally, Fortune reported that Ellen Pao's lawsuit against venture capital firm Kleiner Perkins showed "just how high the legal bar is for plaintiffs to win a discrimination case." Though Pao's evidence showed that the work environment at Kleiner was unpleasant and petty for women, the jury just didn't think it met the high bar for discrimination.

Obama's proposal would make it easier for women to know what men in their company make. The Institute for Women's Policy Research found that about half of Americans working in the private sector have said their employers ban or discourage employees from discussing with each other what they are paid. This means that female employees often can't find out if they're being paid less than men with similar jobs.

But, further, when employees can't talk about their pay and employers aren't required submit salaries for their employees, employers are also hurt. For example, Marc Benioff, the chief executive of Salesforce.com, helped the White House make its case for the rules because he was totally unaware of the pay inequities in his company. Two female employees asked him to investigated possible pay inequality, and he was shocked to find that women were being paid less — for no real reason — than men were. The company spent $3 million to close the gap, and Benioff said it was a necessary move, according to the Times:

We’re never going to solve this issue of pay inequality if CEOs like myself and others continue to turn a blind eye to what’s happening in their own corporations.

Hopefully Obama's proposal will help both companies and women, because the country has no reason to continue paying women less for equal work.