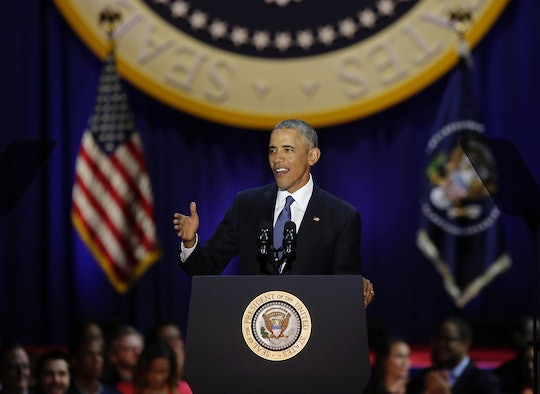 Obama's Sweet Shoutout To Michelle At His Farewell

President Barack Obama’s final remarks on Tuesday night were full of memorable moments and powerful quotes that will go down in history. But, possibly the one Americans will remember the most was Obama’s shoutout to Michelle Obama at his farewell address. “You have made me proud, and you have made the country proud,” he emotionally said as he addressed the first lady in the Chicago convention center.

"Michelle LaVaughn Robinson, girl from the south side, for the past twenty-five years, you’ve been not only my wife and mother of my children, but you've been my best friend," Obama said at the historic event in his adopted hometown of Chicago, the same city where the beautiful couple met in 1989 while working at a law firm in the city.

"You took on a role you didn’t ask for and made it your own with grace and grit and style and good humor," Obama continued while wiping a tear, triggering a standing ovation from the audience. "You made the White House a place that belongs to everybody. And a new generation sets its sights higher because it has you as a role model. So, you have made me proud, and you have made the country proud."

Obama's shoutout to the first lady didn't only make them and those physically in the audience emotional, but his sweet words also took a toll on anyone who was watching his farewell address on Tuesday night, trying their best to keep it together.

Another person who was in awe by Obama's sweet words wrote that "every girl deserves a guy that will brag about them and praise them just like Obama did to Michelle during his farewell address."

Obama also took a moment to recognize his daughters, Malia and Sasha, during his speech on Tuesday night, commending them for how well they handled growing up in the political spotlight.

"Malia and Sasha, under the strangest of circumstances you have become two amazing young women," Obama said. "You are smart and you are beautiful. But more importantly, you are kind and you are thoughtful and you are full of passion and you wore the burden of years in the spotlight so easily. Of all that I have done in my life, I am most proud to be your dad."

With just a few days left in the White House, Obama used this historic moment to address the many issues facing our country and all of the progress we've made towards them as well. Certainly, there's plethora of reasons to remember Obama's presidency, but this sweet moment to thanks his wife once more will certainly also go down in history.