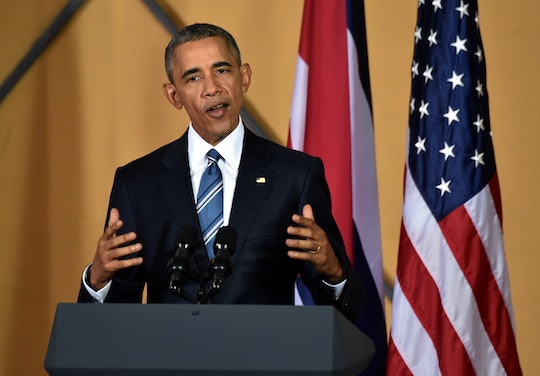 Obama's Speech About The Brussels Attacks Show The U.S. Stands In Solidarity Against Terrorist — Transcript

Early Tuesday morning, three explosions occurred throughout the city of Brussels, rocking the city to its core and sending the world into a state of terror. The first two explosions occurred around 8 a.m. local time at Zaventem Airport in Brussels, and the second took place at about an hour later at a Belgium subway station near the suburb of Maalbeek. After being briefed on the early morning attacks, President Barack Obama spoke on the tragedy and offered his support to the people of Belgium. Obama's speech about the Brussels attacks, which was originally designated to address the relationship between the United States and Cuba, showed that the United States stands with Brussels and any other country that is attacked.

Before I begin, please indulge me, I want to comment on the terrorist attacks that have taken place in Brussels. The thoughts and the prayers of the American people are with the people of Belgium, and we stand in solidarity with them in condemning these outrageous attacks against innocent people. We will do whatever is necessary to support our friend and ally Belgium in bringing to justice those who are responsible.

This is yet another reminder that the world must unite. We must be together regardless of nationality, or race, or faith in fighting against the scourge of terrorism. We can and we will defeat those who threaten the security of people all around the world.

Obama then transitioned into his initial speech, which was intended to address the relationship between the United States and Cuba. Though this may have seemed like an awkward segue to some, Obama's words to the people of Cuba further drove home the point that countries must come together to support one another, rather than be torn apart by hatred and violence.

In his most famous poem, José Martí made this offering of friendship and peace to both his friend and his enemy. Today, as the president of the United States of America, I offer the Cuban people in salura de pas. Havana in only 90 miles from Florida. But to get here we had to travel a great distance. Over barriers of history and ideology. Barriers of pain and separation. The blue waters beneath Air Force One once carried american battleships to this island to liberate, but also to exert control over, Cuba. Those waters also carried generations of Cuban revolutionaries to the United States where they built support for their cause. That short distance has been crossed by hundreds of thousands of Cubans excepts on planes and makeshift rafts, who came to America in pursuit of freedom and opportunity, sometimes leaving behind everything they owned and every person that they loved.

Like so many people in both of our countries, my lifetime has spanned a time of isolation between us. The Cuban Revolution took place the same year my father came to the United States from Kenya. The Bay of Pigs took place the year that I was born. The next year, the entire world held its breath watching our two countries, as humanity came as close as we ever had to the horror of nuclear war. As the decades rolled by, our governments celled into a seemingly endless confrontation, fighting battles through proxies. In a world that remade itself time and again, one constant was the conflict between the United States and Cuba. I have come here to burry the last remnant of the Cold War in the Americas. I have come here to extend a hand of friendship to the Cuban people.

Here is hoping Obama's words in Cuba will spark a change around the world.