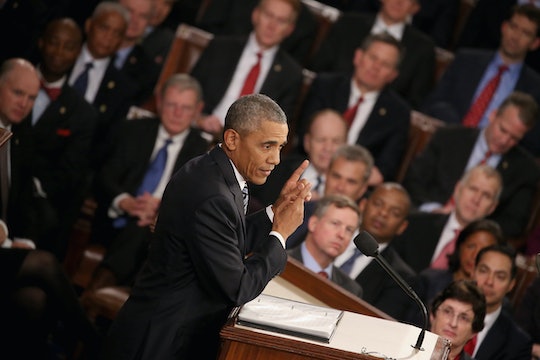 On Tuesday night, President Barack Obama gave his seventh and final State of the Union address. Prior to the event, Obama released a video to YouTube saying he would focus on how far the country has come, but that he would also address the things that he still wants to fix before he leaves office. The video was vague, but Obama did mention that he wanted to build an America that was "more prosperous for our kids." Where Obama stood on women and families at his SOTU address wasn't clear, and that part of the speech was seriously lacking. In a final tally, Obama mentioned "women" zero times and families six times, but a few of those times were general references (they didn't specify policy that would help families).

Obama's presidency has been been marked as one that tried to end the "War on Women" waged by the right before his presidency. Under the Affordable Care Act, women finally weren't responsible for covering the costs of any of the 18 forms of contraception available to them. Finally. And, women's insurance plans also have to cover preventive care recommended by their doctors, like mammograms, cervical cancer screenings, and prenatal screenings "all with co-pay or deductible," according to a White House Fact Sheet.

Last year, Obama also enacted a policy that provided federal employees with a new child up to six weeks of paid leave, according to the Federal Times. Unfortunately, Obama has not been able to get a universal paid family leave law through the Republican-controlled Congress (even though House Speaker Paul Ryan took paid family leave prior to beginning his position and still said he opposes paid family leave for everyone). This means that the U.S. is still the only developed nation that doesn't provide paid family leave to new parents.

Unfortunately, Obama didn't address any specific paid family leave policy during the State of the Union. He only mentioned it once, actually, in the beginning of his speech when he was discussing things that still need work, according to Medium:

That's pretty damn bleak, to put it bluntly. Obama has been working on a paid family leave policy since last year, when he gave a more detailed outline in his last State of the Union. Maybe that's why he didn't focus on it as much this year? Still, it's not comforting — especially for expecting or new parents — that the first president who has been strong on that issue after 8 years of a Republican presidency suddenly seems to be backing down.

According to Medium, Obama did take a stab at corporations, which was kind of him sticking up for families, I guess?:

But after years of record corporate profits, working families won’t get more opportunity or bigger paychecks by letting big banks or big oil or hedge funds make their own rules at the expense of everyone else; or by allowing attacks on collective bargaining to go unanswered.

That's all well and good, but how are politicians — who get money from these big corporations — going to be incentivized to help working families without years and years of Wall Street reform? They won't be, so politicians, including the president, need to think about what they can do to help working families now, or what they will do to actually start reforming corporations who dominate America.

Further, Obama also didn't address protecting women's constitutionally-protected rights to safe abortion, which has been a hot topic since Republicans in both the House and Senate voted to strip the organization of its federal funding. Sure, this is a smaller issue that House and Senate members should be attacking, but it still would've been nice for it to at least get a mention. 'Cause, you know, uteruses make up a big part of the U.S., Obama.

Last, and definitely not least, Obama didn't elaborate on his plan to curb gun violence. Why is this a family issue? Because injuries from firearms send an estimated 7,000 children to the ER every year, according to Think Progress. And children are often hurt or killed in mass shootings every year, such as the shooting at Sandy Hook elementary school, which left 20 first grade children and six teachers dead, according to ABC. Gun violence is an epidemic, and the executive action Obama introduced recently is a small step toward curbing this danger to children in the U.S.

Still, guns are the smallest issue that Obama left unaddressed at the SOTU. The fact that he didn't address paid leave for families, sexual assault on college campuses, or abortion rights is much more problematic. Obama has helped work on these issues quite a lot in his last seven years as president, but women can only hope that his failure to mention them at the State of the Union won't mean that they become totally forgotten.