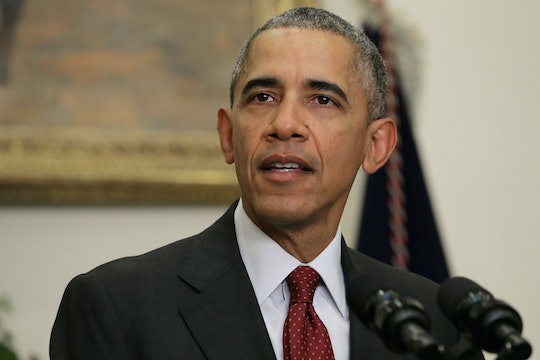 Obama's Statement About The Planned Parenthood Shooting Is So True: "This Is Not Normal"

The day after three people were killed and nine more injured, Obama's statement about the Planned Parenthood shooting in Colorado Springs, CO offers a somber reminder that there is absolutely nothing "normal" about the frequency with which Americans endure acts of gun-based terrorism in our communities. The President called for an end to "easy accessibility of weapons of war on our streets to people who have no business wielding them" in his statement, asserting that our condolences and grief — so often repeated after tragedies like this one — mean very little if we aren't willing to back them up with action to prevent future gun violence.

"The last thing Americans should have to do, over the holidays or any day, is comfort the families of people killed by gun violence — people who woke up in the morning and bid their loved ones goodbye with no idea it would be for the last time.

And yet, two days after Thanksgiving, that's what we are forced to do again.

We don't yet know what this particular gunman's so-called motive was for shooting twelve people, or for terrorizing an entire community, when he opened fire with an assault weapon and took hostages at a Planned Parenthood center in Colorado. What we do know is that he killed a cop in the line of duty, along with two of the citizens that police officer was trying to protect. We know that law enforcement saved lives, as so many of them do every day, all across America. And we know that more Americans and their families had fear forced upon them.

This is not normal. We can't let it become normal. If we truly care about this — if we 're going to offer up our thoughts and prayers again, for God knows how many times, with a truly clean conscience — then we have to do something about the easy accessibility of weapons of war on our streets to people who have no business wielding them. Period. Enough is enough.

May God bless Officer Garrett Swasey and the Americans he tried to save — and may He grant the rest of us the courage to do the same thing."

Just before noon on Black Friday, a gunman identified as Robert Lewis Dear opened fire at a Planned Parenthood in Colorado Springs, ultimately killing three people, including a police officer. The 57-year-old, whose motive for the shooting is currently unknown, was being held Saturday at El Paso County Criminal Justice Center, ahead of a scheduled appearance in court on Monday morning.

Obama's statement in the wake of the Colorado Springs shooting is reminiscent of POTUS' words after the October shooting at Umpqua Community College, which marked the 15th time the fervent gun control advocate had responded to a mass shooting since becoming president in 2008.

Our thoughts and prayers are not enough. It’s not enough. It does not capture the heartache and grief and anger that we should feel. And it does nothing to prevent this carnage from being inflicted some place else in America next week or a couple of months from now.