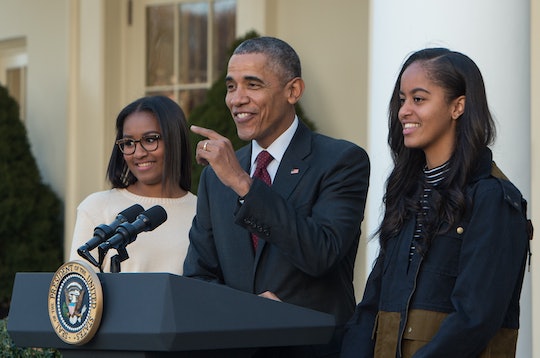 The day before Thanksgiving, one very, very lucky turkey — out of the 46 million turkeys eaten on Thanksgiving Day — gets a reprieve from the chopping block with the annual presidential turkey pardon. President Obama has gleefully enjoyed this particularly presidential duty since he took office. This Thanksgiving marks Obama's seventh and final presidential turkey pardon before he leaves office in January. Obama's Thanksgiving dad jokes have been a White House tradition and he absolutely relished the moment Wednesday with a plethora of spectacular puns. The president's humor reminded me I am going to miss me some Barry somethin' fierce when he leaves office.

First, the set-up: "For the past seven years, I’ve established another tradition: Embarrassing my daughters with a “corny-copia” of dad jokes about turkeys," Obama began. He continued, "This year, they had a scheduling conflict. Actually, they just couldn’t take my jokes anymore. They were fed up." I love a good pun — I really do. And watching Obama's Rose Garden standup routine of epic Thanksgiving dad joke puns is quite a thing to behold. From "Yes We Cran" to the "gravy train to freedom," this presidential turkey pardon just might have been Obama's finest moment of pun-ditry. Here are some of this year's highlights from Obama's best Thanksgiving dad jokes.

Malia and Sasha, by the way, are thankful that this is my final presidential turkey pardon. What I haven’t told them yet is that we are going to do this every year from now on. No cameras. Just us. Every year. No way I’m cutting this habit cold turkey.

Tater the Turkey is a Biden Bro

This year, we’re honored to be joined by two of the lucky ones, who were raised by the Domino family in Iowa: Tater and Tot. Now, Tater is here in a backup role, just in case Tot can’t fulfill his duties. So he’s sort of like the Vice Turkey. We’re working on getting him a pair of aviator glasses.

The Elephant, er, Turkey in the Room

I want to take a moment to recognize the brave turkeys who weren’t so lucky, who didn’t get to ride the gravy train to freedom who met their fate with courage and sacrifice and proved that they weren’t chicken.

And our uninsured rate is at an all-time low, thanks to the 20 million more Americans, including millions of children, who finally know the security of health insurance. That's worth gobbling about.

And when somebody at your table tells you that you’ve been hogging all the side dishes and you can’t have any more, I hope you respond with a creed that sums up the spirit of a hungry people: Yes, We Cran.

DAD STAAAHHHHPPP. Sasha and Malia may have had enough of your amazing Thanksgiving dad jokes, but I'm going to miss them terribly, President Obama. Here's the entire Thanksgiving presidential turkey pardon for your amusement.