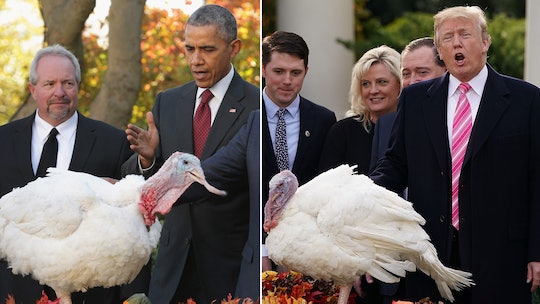 Thanksgiving is a holiday full of traditions, especially for the person in the highest office of the country. And among all the presidential traditions, one that Americans look forward to every November is the presidential turkey pardon. Back in President Barack Obama's day, the pre-Thanksgiving event was an opportunity to hear A+ dad jokes. Now that Donald Trump has been in office for a few years, the vibe of the tradition is a bit different. With Thanksgiving 2019 just around the corner, now seems like a good time to compare Obama's Thanksgivings in the White House with Trump's.

In a tradition dating back to President Harry S. Truman in 1947, the POTUS typically engages in a Thanksgiving turkey pardon in the days preceding Thanksgiving every year. When Obama was in office, he had a heck of a lot of fun pardoning the turkeys every year. For his first pardon in 2009, as ABC News reported, Obama pardoned Courage, a 20-week-old turkey, while joking: "Today I'm pleased to announce thanks to the intervention of Malia and Sasha — because I was ready to eat this sucker — Courage will also be spared this terrible and delicious fate." Obama continued to bring the jokes at his pardoning every year — with his final turkey pardon, in 2016, overflowing with dad jokes.

"What I haven't told them yet is we are going to do this every year from now on. No cameras, just us, every year. No way I'm cutting this habit cold turkey," he joked at the ceremony, according to NPR. "Tater is here in a backup role just in case Tot can't fulfill his duties," he also said, referring to the runner-up turkey being pardoned. "So he's sort of like the vice turkey. We're working on getting him a pair of aviator glasses," Obama added, referring to former Vice President Joe Biden. He also apologized to the crowd at the Rose Garden for all the silly jokes: "Look, I know there are some bad ones in here, but this is the last time I'm doing this, so we're not leaving any room for leftovers."

This year marks Trump's third Thanksgiving in office. In November 2017, Trump pardoned a turkey named Drumstick, and his one big joke during the event referenced his predecessor. "As many of you know, I have been very active in overturning a number of executive actions by my predecessor,” Trump told the Rose Garden crowd, according to The New York Times. “However, I have been informed by the White House Counsel’s Office that Tater and Tot’s pardons cannot, under any circumstances, be revoked.”

In similar fashion, during last year's event, Trump pardoned turkey Peas and Carrots while making jokes about "a fair election" and subpoenas. And in 2019, Trump joked about the impeachment hearings while pardoning turkeys, Bread and Butter.

Another Thanksgiving tradition for the Obama family was volunteering at soup kitchens and food banks every year. For example, in 2015, the family volunteered at Friendship Place Homeless Center in D.C., where they handed out Thanksgiving meals to the homeless and veterans, CNN reported at the time.

"It's not only of the spirit of giving during this holiday season, but our national obligation to make sure all those who serve and sacrifice for our country have a place to call home," Obama said in a speech during his turkey pardon that year. "My administration considers this one of our top priorities, making sure that we're bringing about the reality of zero homelessness for our veterans."

The Trump family spent Thanksgiving 2017 and 2018 a little differently than the Obamas typically did. For the past two years, the family has flown down to Florida, and celebrated the holiday at Trump's Mar-a-Lago residence, according to The Hill.

In 2017, Trump and first lady Melania met with members of the U.S. Coast Guard in Riviera Beach, Florida, providing a spread of food including chips and soda, according to Business Insider. Melania's spokeswoman told ABC News the Trump family's Thanksgiving spread in 2017 was a little more traditional. It included local produce and cheeses, mashed potatoes with gravy, and a variety of baked goods. In 2018, according to The Hill, the Thanksgiving menu at Mar-a-Lago included turkey, a salad bar and seafood.

And once again in 2019, Trump will celebrate Thanksgiving in Florida.

Lastly, the two president's Twitter pages have thus far tended to look a bit different on Thanksgiving. Obama has used Thanksgiving to share gratitude for his family...

...and to acknowledge the importance of serving those in need.

While Trump marked his first Thanksgiving as POTUS in 2017 by boasting about his administration...

The two most recent presidents have certainly celebrated the holiday in different ways, but the turkey pardon is one tradition both share, at least for now.

This article was originally published on November 19, 2018