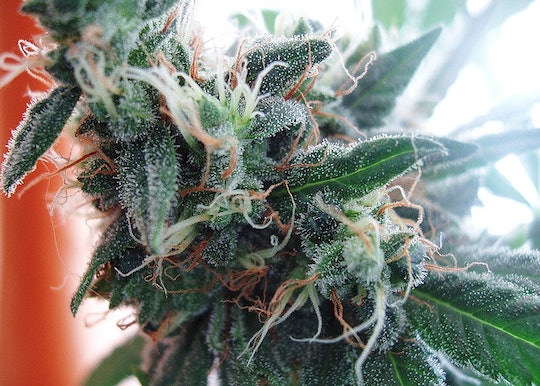 Ohio Doesn't Pass Weed Legalization For Recreational Or Medicinal Use

It looks like not everyone is into medicinal and recreational marijuana. After a long election day, Ohio’s marijuana initiative didn’t pass. The ballot initiative was pretty controversial to start with, and not just because Nick Lachay was backing it. Yes, you read that correctly. The former 98 Degrees member was all about growing pot in Ohio — and that was sort of the problem.

It wasn’t about his crooning skills (because those are pretty much on point). Ohio’s marijuana initiative would have allowed recreational and medicinal use of weed, but only if it was grown on one of ten pre-selected farms. Lachay, retired NBA legend Oscar Robertson, NFL star Frostee Rucker, and two relatives of President William Howard Taft all have stakes in those farms, making it the strangest American monopoly. The kind only a bunch of men smoking weed might agree to. If a state’s going to legalize growing and selling bud, Ohio pretty much decided that it has to be done by more than just a handful of farms. A poll taken this summer found that 53 percent of Ohio voters support the legalization of marijuana, but just not under those terms.

For anyone in favor of legalizing pot for recreational and medicinal purposes, the initiative in Ohio was hard to get behind. Ohio didn’t vote against weed, they just voted against a very bad business plan. Each of the ten farmers also backed the initiative, throwing in around $4 million to back the campaign and another $10 million to get the farms started. Your boy band crush, Nick Lachay, already owns a marijuana farm in Akron, Ohio and was all over it. While it might have been a school girl’s dream to smoke a joint with Mr. 98 Degrees, there have to be better ways to go about it.

It wasn’t the legalization of marijuana that Ohio shut down tonight. It was the idea of a couple wealthy dudes running the show.