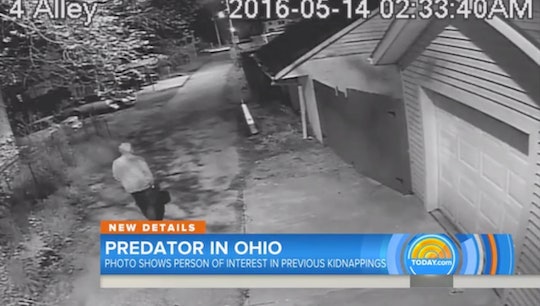 Parents will do anything to keep their kids safe — even in the one place that they should feel the most safe already. From child-proof locks on cabinets to outlet plugs, there is not much that parents won't do to ensure their kids' safety in their own homes. However, an Ohio serial child abductor has parents on high alert in that exact place for an incredibly awful reason — the abductor is reportedly attempting to take children from inside their houses.

Update: In December, the FBI reportedly arrested a man they described as a "serial abductor" after a six-month search. Justin Christian was reportedly arrested and charged with kidnapping and rape, according to People. Christian pleaded not guilty to the charges. Christian's lawyer did not immediately respond to Romper's request for comment.

According to NBC News, the FBI is currently searching for the man who abducted a 6-year-old girl in Cleveland, Ohio and who is allegedly tied by forensic evidence to another attempted abduction of a 10-year-old girl in Elyria, Ohio. The abductions occurred during May and February respectively. Luckily, according to NBC News, both girls are now safe. However, the circumstances of their abductions are terrifying.

That is because the abductor strikes in the early hours of the morning and lurks around the homes before taking the children. According to NBC News, in the Cleveland abduction, surveillance footage from the home shows the suspect lurking around just nights before and then entering the home and leaving with the child the night of the abduction. During the attempted Elyria abduction, security cameras caught the suspect entering the girl's home and unlocking windows during the night before the attack.

While the 6-year-old girl was returned home safe, according to Cleveland.com, the FBI acknowledged that during the 17 hours the girl was missing, she was "violently attacked by her kidnapper." Despite the surveillance footage being able to capture the alleged suspect's face and the car he drives, according to Cleveland.com, all of the tips the FBI has received have been inconclusive. However, the surveillance footage does provide the FBI and families in Ohio with one very helpful thing — it shows how the suspect has gone about his attacks.

In both abductions, the child abductor hung around the victim's homes in the days before the attack. In both attacks he entered the home and took the child directly from there. Therefore, it is incredibly important for parents to make sure their doors and windows are locked before going to bed. According to NBC News, it is also possible that the suspect sought out the families through social media. This serves as a warning to parents and children to watch what they post and who they talk to on social media — whether it be pictures of themselves and the interior of their homes or talking to an unsuspecting stranger.

Although the abductor has not struck in five months, he is still out there — potentially in the Cleveland area, police believe — making it only understandable for Ohio parents to feel the need to be on high alert.