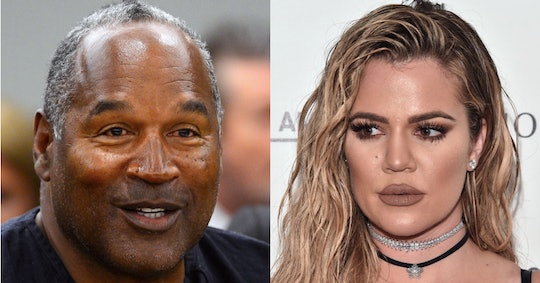 People love keeping up with the Kardashian sisters (no pun intended). The reality stars and social media celebrities are a phenomena — people can't get enough of the sisters and everything they do — which is why every aspect of their personal lives is a topic of conversation. For years, people have been unfairly discussing who Khloé Kardashian's father is, spiraling into a conspiracy theory that former football star, O.J. Simpson, holds that title. But on Wednesday, as O.J. Simpson responded to Khloé's pregnancy, he finally broke his silence on that ridiculous theory. So now people can finally stop speculating, move on, and leave Khloé alone about this once and for all.

Over the weekend, according to the New York Daily News, a photographer asked Simpson if "congratulations were in order" regarding Khloé's pregnancy, after she confirmed she was expecting her first child in December. This question might seem a little out of the ordinary to any other celebrity. But Simpson, after all, was a family friend of the Kardashian family and was close to Khloé's father, Robert Kardashian, according to Slate. So, it is fair for Simpson to have an opinion about it. But in the same answer, Simpson also addressed those paternity rumors, telling the photographer that he had "nothing to do with it." Simpson said, in a video shared by TMZ, that congratulations were in order for his old friend:

Simpson saying he had "nothing to do" with the pregnancy also addresses the rumors that exist that claim Simpson could be Khloé's father, which started in 2012 after an ex-wife of the late Robert Kardashian claimed that Khloé was not Robert's biological daughter in an interview with Star, according to E! News. Khloé quickly shut those rumors down, responding to them in a series of tweets denouncing the interview.

In a 2012 episode of Keeping Up With The Kardashians, Khloé's reaction to the rumors played out on camera after Khloé's mom, Kris Jenner, asked her children to take a DNA test, but Khloé refused. Khloé told her mom in the episode that she knows exactly who her father is. Khloé said in the episode, according to Us Weekly:

Mom, I don't care what they're saying. Because everyone is calling me fat, do you want me to get lipo? Seriously, my dad is Robert Kardashian. My other dad is Bruce Jenner. If you f—ed other people at the same time and you do not know, go on Maury.

But based on a recent tweet just six years too late, it looks like The Maury Show host, Maury Povich, wants to help out. Too bad a paternity test wouldn't be necessary — according to E! News, there is legal proof that Robert is Khloé's dad.

But Khloé is so aware of these silly rumors that she has even gone as far as to joke about them. In 2016, after using the puppy dog Snapchat filter over her face in an Instagram post, Khloé responded to one person who rudely made a comment about her race. Khloé responded to the commenter, according to E! News, joking that "somedays I'm O.J.'s daughter. Others I'm Robert's daughter." During a 2016 episode of her talk show, Kocktails With Khloé, Kardashian said on the show that those rumors really hurt her, saying, according to Us Weekly:

I think the thing that became the most overwhelming was when, like, stuff happened with one of my dad's wives. She wanted to come out, like, 10 years later after my dad passed away and said that I'm not his daughter and that he confided in her and blah-say-blah. I was like, "Listen, you can talk about me and my sisters all you f—king want. Do not talk about my dad. He's not here."

Simpson, like every other Kardashian fan, is excited and happy for Khloé and the news about her pregnancy. It is as simple as that. Now that he has addressed the rumors, albeit somewhat inadvertently, people should really put that old rumor to rest.