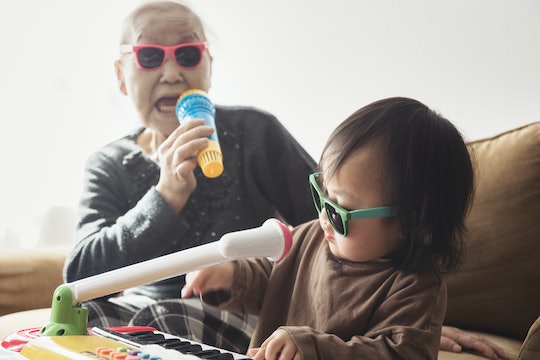 Why don't you move closer to Mee-Maw: the remix. Photo credit: Getty Images

As I understand it, the difference between parenting in the '80s and parenting now is that you didn't have to actively parent your child after about the age of 4. Kids climbed the radio tower, helped aliens get home, and parents didn't care exactly where they were or what they were doing as long as they were home for dinner, which was on the table in a house that those parents owned, because owning houses and not worrying about supervision are two of the birthrights of baby boomers. Am I bitter? Only maybe. But the retort of "OK, boomer" has entered the cultural zeitgeist just in time to sum up the feelings of "damn you, Grandpa!" that I feel any time the older gen of parents tries to tell us what we should be doing (no, my avocado toast habit is not why we cannot buy a house, sir!).

The New York Times' Taylor Lorenz explains "OK, boomer" as a comeback from Gen Z to anyone over 50 who has ~advice~ for young people — not least of all the advice that boomer grandparents have for young parents. The season 11 premiere of Modern Family was unintentionally "OK, Boomer" at its finest, as Haley Dunphy, played by Sarah Hyland, tried to forge her own path as a parent by religiously following a fictional book called Your Parents Did Everything Wrong.

Are you getting all hot and itchy just thinking about sentences that start with “Back in our day, we…?” Then I bet you can relate to these words of wisdom that every grandparent has uttered... (It goes without saying that #notallboomers applies to each of these, but let us have this rant!)

Maybe you did, Irma, but your grandchildren use a five-point harness (that you will be unable to loosen when it comes time to pry them out because for some reason the "loosen seatbelt" button is out of reach to all boomers), and are ideally not placed into the car with juice boxes in their rear-facing seats for car-leasing reasons.

2. "You loved facing forward. Why don't you turn him around!"

See above: I bet that babies *do* enjoy looking out the window as they zoom along highways at 60 miles per hour. They also like gnawing on car keys, but that doesn't mean it's a good idea.

3. "Oof, looks like you really have your hands full."

Announced from couch as you handle a nightmare diaper situation and said boomer reads Thomas Friedman on their iPad.

4. “We put cereal in their bottles to help them sleep through the night.”

Afraid that's a "no dog" from the American Academy of Pediatrics on putting solids in a bottle. Oh, you’re still insisting? One more time for the people in the back: CHOKING HAZARD!

This one was echoed in the Dunphy house as Claire suggested that Haley switch from breastfeeding to formula to help her twins sleep. Why not just feed my baby steak, Marjory? I bet that would be slow to digest, too!

6. "You should get a job at the New York Times/the NBA/Louis Vuitton/Vogue."

Always coming in clutch with the careers advice, boomers, who enjoyed prolonged periods of economic and wage growth, are full of helpful tidbits about job-seeking, including such nuggets as "You just take your resume into the Dodgers and tell them that you won't leave until you get to hand it to the general manager!" We are aiming high, the problem is that private enterprise has lopped the top off the social mobility ladder since boomers were last using expense accounts to enjoy power lunches.

Ah yes, this needy 2-day-old wants to eat again, after eating two hours ago with her jelly-bean-sized stomach. Here I go again, a millennial parent indulging my baby!

8. “You’re spoiling the baby by holding him too much.”

I was definitely guilty of this one, and I couldn't be more proud of it (even if my back ached by the end of each day because just holding him didn’t cut it, I had to be standing). Sorry not sorry I love my child and want him to be happy.

Ah yes, a grandparent's eternal love of screen time for babies. Mom, he’s staring at bright colors and moving objects in the same way he stares at the ceiling fan. I promise my newborn is not actively watching The Today Show.

10. “Don’t you want to give her a blanket or stuffed animal in the crib? She’s bored.”

I am willing to admit that the '80s, when you would just dump a toy bin over your baby's head in the crib and let them "entertain themselves" between the hours of 7 p.m. and 7 a.m., were a golden age for parents, but sadly the pediatrician is not on board with turning the nursery into a ball pit juuuust yet.

11. "You really need to look after yourself."

Said before boomer disappears to their boozy "book club" meeting, leaving you chasing two toddlers around with their pajama pants.

12. “She’s going to get addicted to that sound machine.”

And your point is? I know plenty of grown-ass men who can’t fall asleep without the gentle lull of ocean waves roaring next to their alarm clocks.

13. “We would put a little [INSERT RECALLED PRODUCT] on their gums.”

File under: deadly things our parents used to give us, along with bourbon on the gums. And while we’re on the topic, that diarrhea/rash/fever is not teething-related! Pretty sure the only sure-fire sign of teething is a tooth emerging.

14. "There is nothing better than being a grandparent."

Can't disagree with you!