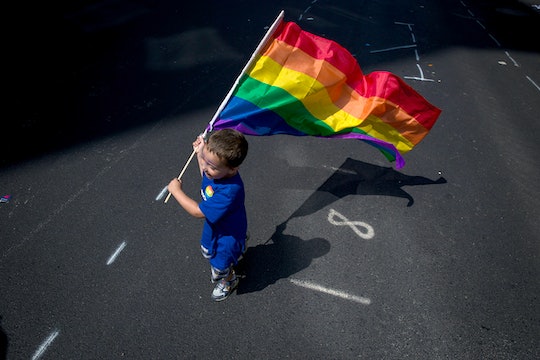 "We hold that a non-biological same-sex co-parent has the right to seek custody, visitation, and support of his or her child on the same equal terms as the biological parent," the court wrote in an early draft of its ruling.

Tuesday's decision stemmed from a case involving Lori Schnedler and Heather Nicole Lee, a same-sex couple the court noted in their ruling had had a child through the use of a sperm donor during the course of their 10-year relationship. Although Lee was the child's biological mother, Schnedler was present at the child's birth, cutting the umbilical cord, according to the court.

In their ruling, the Oklahoma Supreme Court noted that both Lee and Schnedler had agreed to raise the child together as theirs and that Schnedler had served as "a parent to [the child] in every respect" for the first eight years of their life. "Lori did not act in the place of a parent; she is a parent," the Oklahoma Supreme Court said in their ruling. "The record in this case cannot reasonably be read otherwise."

When Lee and Schnedler separated in 2015, the pair followed a regular visitation schedule for seven months before Lee denied Schnedler any further custody or contact with the child, according to court documents. It was at that time that Schnedler took legal action, filing for custody and visitation on grounds of in loco parentis, a legal doctrine that establishes a non-biological individual's parental rights.

The court noted that although they had "long recognized that the right of custody and visitation is not bound to the strict confines of biological relation," they had until recently only given non-biological parents in same-sex relationships the standing to assert their parental rights in loco parentis.

"We have not presumed parentage for the non-biological parent in same-sex couples, but allowed the pursuit and validation of such rights only when there exists some prior agreement between the couple regarding the same — and only where the same-sex couple was 'unable to marry legally,'" the court wrote in its ruling. "We can no longer say that this approach serves the best interests of the children of these relationships," the court continued, noting that "temporary and uncertain parental status" can create an unstable environment for children.

"Their children see them as mom or dad. The law should treat them as such," the court wrote. The Oklahoma Supreme Court went on to outline a new set of practical guidelines for lower courts in the state to observe when considering cases involving a non-biological same-sex co-parent seeking parental rights.

"To establish standing, a non-biological same-sex co-parent who asserts a claim for parentage must demonstrate — by a preponderance of the evidence — that he or she has: engaged in family planning with the intent to parent jointly; acted in a parental role for a length of time sufficient to have established a meaningful emotional relationship with the child; and resided with the child for a significant period while holding out the child as his or her own."

Schnedler's attorneys hailed Tuesday's ruling and the court's move to establish a new test for custody cases involving same-sex couples as a win for LGBTQ families. "The Court recognized non-biological LGBT parents are every bit as much parents to their children as are their biological parents," attorney Chris Brecht said in a news brief released by the McAfee & Taft law firm.