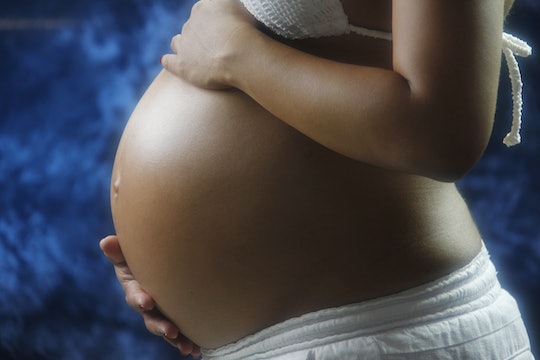 Boy howdy, where do I even begin with this one? I guess I'll just start with the main player here: An Oklahoma state representative — Justin Humphrey — has introduced a law into his state legislature that would require a pregnant woman to get written consent from her sexual partner in order to obtain an abortion. More specifically, this Oklahoma lawmaker said pregnant women's bodies aren't their own and — wait for it — they're actually "hosts" once they become pregnant. Folks, you cannot make this sh*t up anymore. Humphrey did not immediately return Romper's request for comment.

Speaking to The Intercept, Humphrey tried to clarify his position behind his restrictive abortion bill: "I understand that they [women] feel like that is their body. I feel like it is a separate — what I call them is, is you’re a ‘host.’" To clarify, no, this is not the story you might have heard from two years ago when a Virginia state senator referred to pregnant women as "hosts" on Facebook. Nope — this one is coming straight from the mouth of the man who wrote the anti-abortion bill that will be heard on Valentine's Day in the Oklahoma state legislature. Oh, do go on Rep. Humphrey:

And you know when you enter into a relationship you’re going to be that host and so, you know, if you pre-know that then take all precautions and don’t get pregnant.

Besides expanding Oklahomans collective vocabulary with "pre-know," Humphrey has also blown the minds of plenty of reproductive choice advocates for not only introducing an anti-abortion bill that was struck down over two decades ago in his state, but with his "you do realize we are in 2017 and not 1917" backwards logic on pregnancy and women's rights. Clearly Humphrey missed the class on women's reproduction that said, first, that his opinions were relevant; second, that birth control can fail (both condoms and the pill); and, third, that women do not become human incubators once they are pregnant. For example, if a woman is dying because of a pregnancy, a doctor has an obligation to save her even if it means the pregnancy cannot be saved.

But wait — it gets ever more absurd. Again, speaking to The Intercept, Humphrey continued:

So that’s where I’m at. I’m like, hey, your body is your body and be responsible with it. But after you’re irresponsible then don’t claim, well, I can just go and do this with another body, when you’re the host and you invited that in.

According to Humphrey's own website, he intends to "be a Republican voice for rural education, bringing jobs to the area, and helping solve major problems within all levels of government." Clearly women having providence over their own bodies is a problem... in the government...? Yeah, I'm not getting it either.

Ever since Trump was inaugurated as president, and with full Republican control of Congress, reproductive choice is under attack like it hasn't yet seen, with an onslaught of legislation across the states and even on the federal level. If only there was a way to donate copies of Our Bodies, Ourselves to every GOP member of Congress — along with freshly printed copies of the Roe v. Wade ruling to boot.