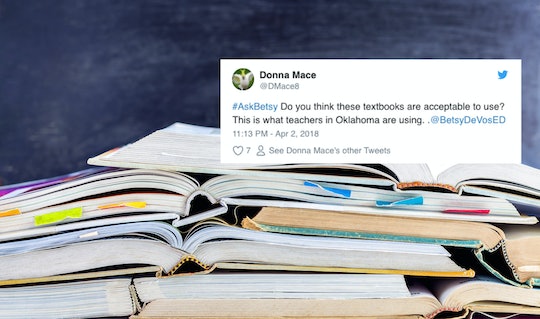 Teachers in Oklahoma aren't messing around anymore when it comes to state funding and pay raises for school employees. That's because Tuesday marked day two of state-wide teacher walkouts to protest the abysmal conditions in which they're forced to educate the future generation. From pay freezes on their already low salaries, to class sizes that are too large, to teachers leaving the state en masse for better pay opportunities, to not having enough chairs for students to sit in, to books that are out of date by decades, frustrated educators aren't holding back. In fact, in the midst of the teacher walkouts this week, Oklahoma teachers are sharing photos of worn textbooks. And it speaks volumes about how much education isn't valued.

The Hill reported that 36,000 people gathered at the Oklahoma state capitol on Monday in support of the walkout, and they certainly aren't backing down on day two. If you're still confused about why the walkouts are going down, this BBC interview follows three Oklahoma teachers during a typical school day, and it's incredibly eye-opening. "I was never just about giving teachers a raise," an eighth-grade teacher explained. "It's really about the fact that I only have 29 textbooks for a group of kids of 87 — and I wish I was exaggerating."

Other signs that Oklahoma is in desperate need of more money for its schools? At one of the schools BBC visited, students only attend four days each week because of deep funding cuts. Plus, two of the three teachers hold part-time jobs on top of teaching full-time, just to make ends meet. For now, though, let's take a look at what students themselves are working with in the classroom. Like these torn and tattered textbooks, for example.

Or the textbooks at this school, which list George W. Bush as the current president of the United States. (Yeah, for real.) Never mind that W. has been out of office since 2009.

Here are even more crumbling textbooks used by Oklahoma students.

In addition to the sorry state of textbooks, educators are sharing photos of the crumbling chairs in their classrooms. One Oklahoma educator, Laurissa Kovacs, has attracted a significant amount of attention with an impassioned Facebook post explaining why she's walking out. At this point, she doesn't have enough chairs for her students — and the ones she does have are slowly falling apart.

"These kids deserve so much better than this," she wrote on Facebook. "They deserve teachers who are qualified to teach. They deserve classes that are small enough that the teachers can actually spend some time with each student. They deserve CHAIRS." Kovacs continued:

They deserve a quality education just as much as kids in surrounding states. This is about so much more than a raise. It’s about the future of Oklahoma. That’s why I’m walking out.

Another Oklahoma teacher, Margie McElhany, described the conditions in which her students are forced to learn. "In our building alone, the chairs are falling apart, the plastic is breaking off of them. We have classrooms that have ceiling tiles missing from rain," she told KXII. "Every time it rains heavy, we have classrooms that flood, and peeling paint, along with tiles missing." McElhany continued:

We have no choice, we need to do this for the students.

As NPR reported in December, teachers and principals across the nation are literally paying hundreds of dollars out of their own pockets each year for classroom supplies. My question is this: Why is this acceptable? Why should teachers in Oklahoma (or anywhere in the U.S., for that matter) be expected to shell out their own money to complete their job — a job for which they are already underpaid, overworked, and don't have enough supplies to go around for their students?

As CNN reported, Oklahoma ranks 48th in the nation when it comes to teacher salaries. Hopefully, these massive walkouts are enough to make the state wake up and realize how much school systems are suffering. Because our kids deserve so much better.