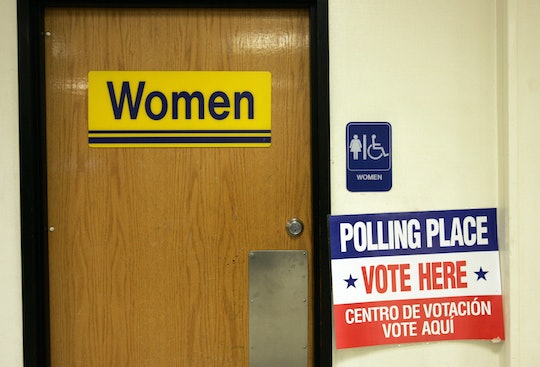 2016 hasn't been short on controversial, abortion-related legislation but a new law proposed in the state of Oklahoma might be the most bizarre. Oklahoma wants to require anti-abortion signs in public restrooms, going so far as to suggest that bathrooms should be "pro-life" spaces. The board of health for the state was set to discuss the proposal on Tuesday, which would include signage in public restrooms stating the following message:

There are many public and private agencies willing and able to help you carry your child to term and assist you and your child after your child is born, whether you choose to keep your child or to place him or her for adoption. The State of Oklahoma strongly urges you to contact them if you are pregnant.

Aside from the more obvious assault on reproductive rights and an individual's right to choose, some in opposition to the measure cite cost and time constraints as a reason it's a bad idea: signs would need be in place by January 2018, a process that could cost the state $2.3 million dollars, according to the Associated Press.

The signage was a provision of the Humanity of the Unborn Child Act, which passed in the state over the summer and also outlined other measures meant to reduce abortions across the state. The above mentioned statement was essentially the act's thesis, and was also meant to appear on the state website. The act also, quite literally, states its overall goal in regard to the propaganda as "achieving an abortion-free society."

If the signage portion of the act actually happens, then that statement would be posted in public spaces like restaurants, hospitals, and schools. Pro-choice advocates and business owners throughout the state have come together to protest not just the sign's message, but its cost to those operating the businesses who, regardless of whether or not they object, don't want to spend the money. Technically, the law states that the Department of Health must provide the signs, but it doesn't allocate any funding for them.

The issue of cost — and, you know, constitutional rights — is on the table Tuesday as the Department of Health discusses the specifics of the legislation. This conversation comes on the heels of a bill that would have criminalized the performing of abortions by Oklahoma physicians, which legislators passed back in May (it was almost immediately vetoed by Oklahoma Gov. Mary Fallin).

The abortion debate has been reinvigorated by President-elect Donald Trump and his growing number of anti-choice Cabinet members, along with a predominantly Republican Congress. This political perfect storm has many fearing the defunding of Planned Parenthood, restrictions on birth control coverage and access, and, of course, the criminalization of abortion in the U.S. through the overturning of Roe v. Wade. President-elect Trump has stated in the past that he would leave it up to states if they wanted abortion to remain legal; a decision that would greatly reduce abortion access throughout the United States.

The proposal in Oklahoma begs an even bigger question: does the government actually have the right to impose specific beliefs onto its citizens? Does free speech — a constitutional right of the people — include the government? We know that, particularly during an election year, those in the government often make endorsements or campaign on behalf of people they support. We also know that individual politicians and political parties have set belief systems, ideals, and agendas that influence what they campaign for, how they vote, and perhaps most importantly, who votes for them. But do government entities, state or federal, actually have the right to require propaganda in public spaces that promotes a single belief system, and isolates and effectively bullies those that don't share those beliefs?

The very purpose of the First Amendment is to protect individual rights from "government interference," but the Supreme Court does allow for some wiggle room, wherein the government can regulate speech — but usually only in the name of preventing violence. Generally speaking, then, the government can't compel individuals to think or believe or say or act in accordance with some pre-set standard.

The incorporation doctrine is a doctrine of the Bill of Rights that specifically addresses what pertains to states, but essentially maintains that state governments are held to the same standards as the federal government, according to Cornell Law.

The question gets even more complex considering that many arguments against abortion are religiously motivated, and there should hypothetically exist a separation between church and state. Furthermore, by pushing one view point on an issue like abortion that has many religious roots, such propaganda could even be considered to be infringing upon individual religious rights.

Further, the signage proposed is the very definition of propaganda: the spreading of ideas and information that is misleading, or is intended to harm those in opposition to it — whether it be a belief, a person, or a group. The message that the state of Oklahoma hopes to spread is in direct opposition, not just to those that are pro-choice, but to leagues of other scientifically-vetted options concerning contraception, pregnancy, and reproductive rights.

To not just suggest, but impose, only one solution for an unplanned pregnancy on the public, while at the same time specifically failing to mention alternatives that don't fit the state's chosen narrative, is not just dishonest — it's dangerous. The message that Oklahoma wants to insist upon is not just biased, but manipulative. By targeting people in a vulnerable setting, like a bathroom, and using language that purposefully excludes options and alternatives, the state government is pushing a potentially dangerous agenda.

Perhaps what's most concerning isn't the specific agenda the government is trying to push, but rather that it is knowingly — and openly — doing it.