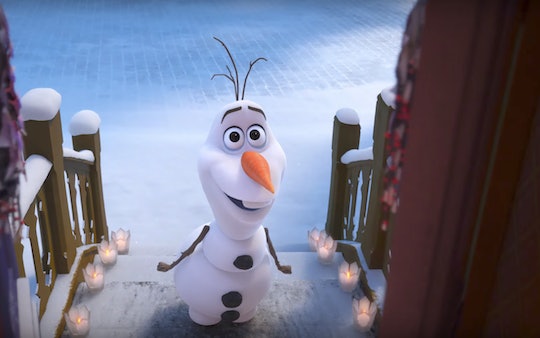 The ‘Olaf’s Frozen Adventure’ Trailer Will Warm Your Heart

Just when you thought you couldn't get Moana's "You're Welcome" out of your head, get ready for the songs of Frozen to captivate your kids' hearts — and your ears — once more. On Tuesday, Walt Disney Animation Studios released its first trailer for Olaf's Frozen Adventure, a 21-minute animated featurette set to premiere in November in theatres nationwide. Anna, Elsa, and everyone's favorite snowman Olaf are back together for a delightful Christmas adventure, just in time for the holiday season this year.

Olaf's Frozen Adventure was originally announced as an ABC television special, but apparently its awesomeness was too amazing to keep on the small screen, so to theaters it's headed — in 3-D, no less. Olaf's Frozen Adventure will be shown before Coco, Pixar's new film about Día de Muertos. The original cast is back together for the latest tale from the Scandinavian village of Arendelle, with Kristen Bell as the voice of Anna, Idina Menzel as Elsa, and Josh Gad in the titular role of Olaf. The premise is super sweet: The featurette is centered on Anna and Elsa's first holiday together since being reunited, and they realize they never grew up with family holiday traditions — and Olaf heads out across Arendelle in search of family traditions for the royal sisters.

John Lasseter, chief creative officer for Disney and Pixar, told Entertainment Weekly why Olaf's Frozen Adventure is set around the holidays, saying, "People forget that the first movie took place in the middle of summer, so this is really the first holiday season after the girls have come together." When Olaf overhears that Elsa feels guilty that she's the reason their family never developed holiday traditions of their own, he sets off with Sven the reindeer to find "the greatest family tradition" in all of Arendelle that the sisters can adopt for themselves.

According to Lasseter, Olaf's Frozen Adventure joins the 2015 short film Frozen Fever and even the forthcoming Broadway musical adaption of Frozen as yet another important story from within the wintry Scandinavian universe, all leading up to Frozen 2, set to be released in November 2019. "You could sit and watch Olaf’s Frozen Adventure and Frozen 2 as one big marathon," Lasseter told Entertainment Weekly.

There's no word yet on what the story of Frozen 2 might be about, but according to an interview with Chris Buck, Frozen's creator, the creative team already has the ending for the full sequel figured out. Will Olaf's Frozen Adventure tease any storylines from the Frozen sequel? That remains to be seen, but for Frozen fandom, Olaf's Frozen Adventure should happily tide them over on the long wait until the sequel comes out in November 2019. Olaf's Frozen Adventure will open ahead of Pixar's Coco on Nov. 22 in theaters nationwide.

More Like This
Keke Palmer Casually Drops Her Baby's Sex On Jimmy Fallon
Freeze! The Single From The New 'Bluey' Album Just Dropped
Marie Kondo Gives Up Tidying Post-Kids, Sparking Joy For Moms Everywhere
Josh Duhamel Is Glad He Took Fergie's Advice About Dating After Divorce
What Parents Are Talking About — Delivered Straight To Your Inbox