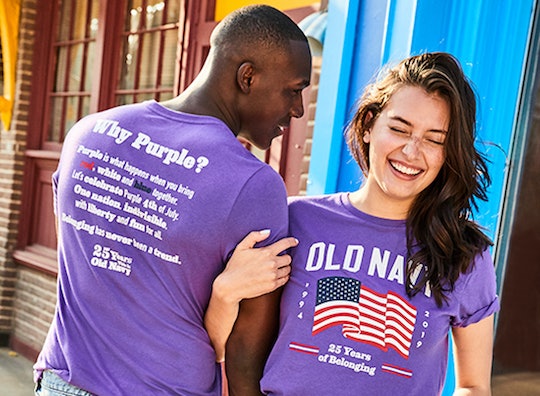 Clothing choices are always an integral part of any tradition, and one of the most iconic retailers to sell them is offering a whole new take on your favorite summer holiday. In light of the retailer's 25th anniversary, Old Navy's new 4th of July t-shirts are now purple, as opposed to its traditional red, white, and blue patterns, and are available only in limited quantities.

In honor of the upcoming July 4th holiday, Old Navy has become known for selling red, white, and blue "Americana" themed t-shirts for purchase. However, this year, the brand is updating its design, and with a pretty meaningful message behind it, too. Old Navy has now released a line of limited-edition purple flag t-shirts, exactly 1,994 of them, to commemorate the store's opening year.

However, there's another layer of meaning for the purple t-shirt as well. At a time of intense political divisiveness, the store wanted to take an opportunity to create merchandise that symbolizes the uniting of parties (red + blue = purple). "Navy’s iconic, Americana red, white and blue flag tees have been a staple in American households since 1994, but this year, the limited-edition purple tees are meant to celebrate and promote belonging," the company said in a press release. "A reminder that we are one nation, indivisible, not defined by the current labels of 'red' and 'blue.'"

The shirt is available exclusively at the brand's store in Times Square, New York City, through July 4th, and retails for $5. If you aren't in the New York area, you can also purchase it online, at OldNavy.com/Purple, along with a curated selection of other purple items as well. These include items for men, women and children, such as pants, skirts, flip flops, and other accessories. Given that there are only a limited number of the purple shirts available, the brand has decided to continue making its traditional flag tees for this year as well.

Rounding out the "purple" themed celebration, the brand has turned their digital logo purple, their social media pages purple, and the LED sign on their store in Times Square is, as well. The purple theme will reportedly remain intact until July 4.

Old Navy also started a social media campaign to talk about what "belonging" means to different people, posting a Regina Hall quote on Instagram that says, "Belonging feels like you are in tune with your tribe." The company then asked their followers to share what that word meant to them, along with the hashtag "#belonginglookslike."

It's not the first time that the color purple has been used as a symbol for unity. Back in 2016, according to Vanity Fair, Hillary Clinton wore a purple suit during her concession speech. "We have seen that our nation is more deeply divided than we thought," she said at the time. "But I still believe in America, and I always will. And if you do, then we must accept this result and then look to the future."

The merging of the country's two most enigmatic colors to create a new, beautiful message of togetherness and inclusiveness are important right now, particularly in a volatile political climate that only seems to be escalating in severity. Though it is just a t-shirt at the end of the day, using such a symbol to celebrate the coming together of this country is an important step in the right direction.