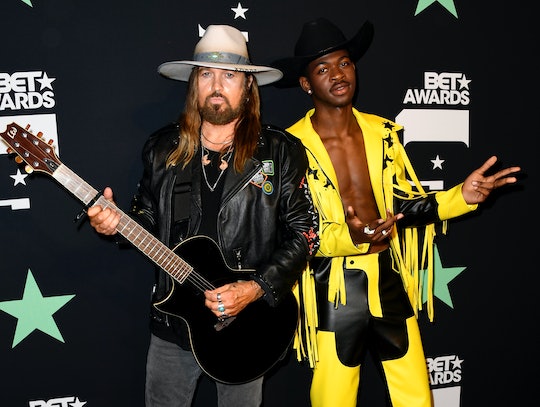 OK, who hasn't been a least little infatuated with "Old Town Road" this past year? The song by rapper Lil Nas X featuring country music legend Billy Ray Cyrus has been put on practically every playlist and played at every single party this summer. And it appears that everyone, and I mean everyone, is a fan of the jam. In case you didn't know, it seems that "Old Town Road" can soothe crying babies, and don't worry, there's some sweet evidence to back that up.

When a baby cries, it typically means they're tired, hungry, need their dirty diaper changed, or just want a cuddle from mom. But it could also mean they really want to listen to "Old Town Road" — at least, that was the case for one infant. Although it isn't backed by any scientific research or study, "Old Town Road" could possibly soothe your crying baby if they won't stop being fussy. And a new video, shared by Billy Ray Cyrus on Instagram, is pretty much proof of this.

In the sweet post, a little baby can be seen in their car seat, crying and acting fussy, as babies are known to do. But once the opening notes of "Old Town Road" begin to play, the baby immediately stops crying. Their eyes begin to widen and their frown completely disappears once Cyrus starts singing. The song works like magic. It's kind of incredible, actually. See for yourself...

Even Cyrus' followers are amazed by the song's baby-soothing power.

"OMG that song has more power than I thought," one wrote.

"She immediately stopped when she heard it, OMG," another added.

"Only you could do this to a child," one smartly said.

It shouldn't come as a surprise that this song has some magical qualities. This video is only a testament to the power of "Old Town Road", which has also been evidenced by the amount of records the song continues to break. In July, for instance, the song became the longest running #1 song on the Billboard Hot 100 charts, according to Good Morning America, and it hasn't shown any signs of leaving that top position any time soon. If you turn on the radio to a pop station, it's likely you'll hear "Old Town Road" play.

This baby isn't the only little one obsessed with the song — kids love it, too, according to Quartz. After students at one Ohio elementary school went viral for singing "Old Town Road", Lil Nas X actually showed up to put on a performance for them and produced a video just as good as the original, according to Fader. This is because "Old Town Road" is a "stealth children's song", according to The Washington Post.

The song's lyrics are relatively clean enough for parents to appreciate, and the song is catchy enough for kids to sing along to. It's such a hit with kids, that The Washington Post predicted, in April, that it could become the next "Baby Shark." They might be on to something...

If your infant also stops everything they're doing when they hear "Old Town Road", there could be an explanation for this. Infants "prefer certain types of musical sounds and vocalizations", according to National Geographic. Research has found that babies like happy voices, and like being sung to in a conversational tone — "Old Town Road" is a song that possesses these qualities. It's the same concept that's put into play when parents sing their kids a lullaby — they're trying to soothe them and calm them down by singing a familiar song.

The next time that parents put their infants down to bed, maybe they should consider singing "Old Town Road" to them. It just might have the power to work wonders.