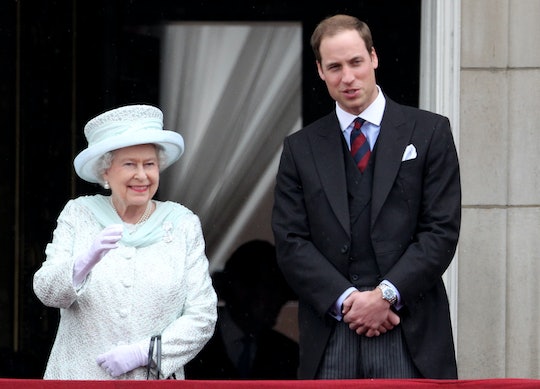 Once Upon A Time, The Queen Sprinted After A Young Prince William & It Was Incredible

Although he's a composed and refined adult now, it wasn't too long ago that Prince William was testing his grandma's babysitting skills by running wild at royal weddings. Don't believe me? An old video of Queen Elizabeth running after young Prince William at the wedding of Prince Andrew and Sarah Ferguson in 1986 recently resurfaced, wowing viewers with how quick the queen was to keep the toddler prince out of harm's way.

"Late post, but it's been 33 years since the wedding of Prince Andrew and Fergie in 1986," a Twitter user with name katemidletons wrote in a tweet featuring a clip of the newlywed's send off. "And so here's Queen Elizabeth running after little Prince William to stop him from getting closer to the carriage. Her Majesty as a grandma is cute."

In the accompanying clip, the queen can be seen dressed in a pleated purple skirt with a matching long jacket and hat. Holding her gloves and bag in one hand, she runs to catch a young Prince William by the hand as he darts after the horse-drawn carriage carrying the newlyweds away. Although she's 93-years-old now, the queen would have been a spry 60 at the time of Prince Andrew's wedding, with plenty of energy to keep after her mischievous grandchildren.

And if footage of the queen jumping in to "Granny mode" wasn't cute enough, the clip features Prince William wearing an adorable sailor-inspired outfit, complete with a straw boater hat. According to People, Prince William served as a page boy for Prince Andrew's royal nuptials.

By all accounts, Prince William enjoys a good relationship with the queen, whom he, his brother, Prince Harry, and their six cousins are reported to call "Granny" in private. In fact, Prince William wrote a heartfelt tribute to the queen for the preface of Elizabeth II: The Steadfast, a biography written about her by Lord Douglas Hurd.

"From a personal point of view, I am privileged to witness the private side of The Queen, as a grandmother and great-grand mother," he wrote. "The Queen's kindness and sense of humor, her innate sense of calm and perspective, and her love of family and home are all attributes I experience first-hand." He went on to stress the importance of learning from her legacy and celebrating it. "All of us who will inherit the legacy of my grandmother's reign and generation need to do all we can to celebrate and learn from her story," he wrote. "Speaking for myself, I am privileged to have the Queen as a model for a life of service to the public."

And it seems as if, over the years, the queen's influence may have rubbed off on Prince William. "William is like his grandmother," E! News reported Jamie Lowther-Pinkington, the former private secretary of William and Harry, once told royal biographer Sally Bedell-Smith. "He gets on with his duty, dedicates himself to doing the job. He is not flashy, not an entrepreneur, not a ruffler."

But at 93, it's likely that the queen's days of literally running after toddlers are over. I suspect she prefers to sit back with a royal corgi or two and watch her grandchildren run after their own toddlers.