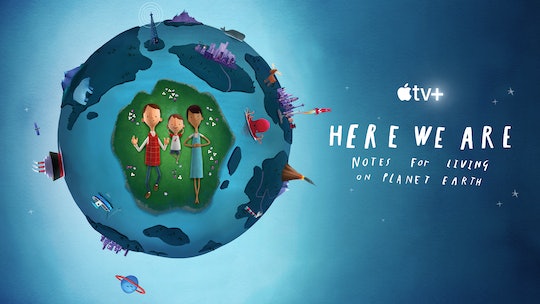 Oliver Jeffers & Chris O'Dowd Are Going To Tell You How To Be A Good Person, Live

The global shutdown has seemed, at times, like a stalled elevator — you are trapped with the people there at the moment the curtain fell, with the occasional exciting interruption over the intercom. Oliver Jeffers, the best-selling children's author and artist, has been appearing in people's homes to offer a few minutes' interruption at a time since mid-March as he does his live "Stay At Home Storytime" readings on Instagram. "In the Seattle airport, just before we boarded a flight to Dublin on the fourteenth of March, I was wondering what we would do inside a two-bed apartment during our then self-imposed quarantine (no longer self-imposed)," Jeffers tells Romper by email from Belfast. "Then I got to thinking what other parents with kids would do, and — quite on a whim — decided I'd read a book online each week day."

He announced his readings on Instagram before hopping the 11-hour flight, and was "quite unprepared for the overwhelming response it received once we landed."

Today, we can reveal that he will be reading Here We Are: Notes for Living on Planet Earth on Instagram on April 15 at 11 a.m. PDT/2 p.m. EDT along with star of Bridesmaids, Family Tree, The IT Crowd and your heart, Chris O'Dowd. Yes!

Here We Are is a kind of child-friendly version of The Hitchhiker's Guide To The Galaxy, and a story that feels eerily important right now. It's also set for release on Apple TV on April 17, with an adaptation voiced by Meryl Streep, Chris O'Dowd, and other big guns (you can watch an exclusive clip below).

"Here We Are, of all my books, seems the most relevant for the world's current reality," says Jeffers. "It began as a sort of comedic routine in pointing out the obvious, but slowly it dawned on me the importance of re remembering the basic principles of what it is to be alive on earth in the 21st century."

Jeffers hit a more philosophical tone in The Fate Of Fausto last year, which saw a man swallowed up by the ocean for his hubris (my kids loved it), and of course provided the illustrations for The Day The Crayons Quit, which was bursting over with pushy personalities. He has been considering human nature for some time.

In life, as in Here We Are, "The earth is indeed divided into land and sea, night and day," says Jeffers. And "even though people come in many shapes, sizes and colors, that we all look different, act different and sound different, we are all people. And of all the places there are in the universe, people can only live on earth.

"As each of us in self isolation looks out the window at the planet we’ve mostly taken for granted — as it gets a respite from us — what dawns on us is that we’d have nothing if not for this earth, and of all the things most important to humanity, at the top is our relationships with each other."

Good thing, because we're here for a while.

Oliver Jeffers and Chris O'Dowd will be reading Here We Are on Instagram on April 15. Here We Are: Notes For Living On Planet Earth premieres on Apple TV on April 17.