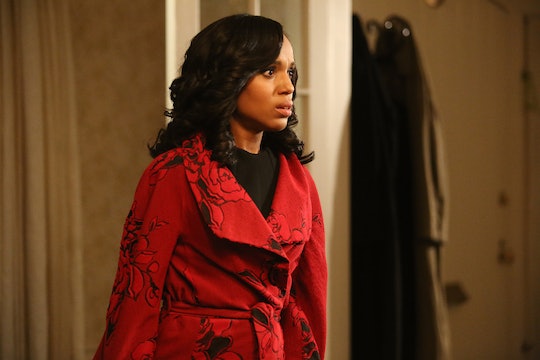 Shonda Rhimes' hit show Scandal returned for its midseason premiere on Thursday night. Not only did Olivia Pope's romantic interests take a turn soon into the episode, her wardrobe did as well. Gone is Olivia's signature white trench coat in favor of one that's not only new, but red and leather. In fact Olivia's colorful new wardrobe caught the attention of Twitter fans everywhere — and thankfully, they had nothing but good things to say about it.

Since Scandal began, Olivia Pope–expert fixer in Washington D.C.–has had a killer, yet black and white only wardrobe. Now in it's fifth season, the change in color is incredibly noticeable to longtime fans. Olivia's new penchant for red may be a symbol for other changes to come.

According to The Washington Post, Olivia's new trench was designed by New York-based designer Derek Lim. The coat premiered in his pre-fall 2015 collection, and sold for a casual $5,900. (It was ABC's trailer for the midseason premiere of Scandal that first brought attention to the new trench.)

As a fixer, Olivia Pope leads a group called the Gladiators, dedicated to do good — and it was often said they donned the "white hat." In the trailer, Olivia literally threw away that white hat. It was time to "say bye-bye to the white hat and hello to a whole new jam."

Olivia's new digs don't stop at the trench coat. In the first few minutes of the premiere, Olivia had two different outfits, both beautiful red dresses. This is much different than the minimalistic fashion Olivia usually dons.

Considering what happened in the first half of season five and the midseason finale, this new color makes sense. Other aspects of Olivia's life has changed, so her wardrobe appropriately followed suit. When we last saw Olivia, she had ended her relationship with President Fitz Grant and moved out of the White House and into her own apartment.

In an interview with Us Weekly, Olivia Pope actress Kerry Washington remarked on how Olivia had changed. "She’s a different woman when we come back," said Washington. "She’s wearing bright colors and behaving differently, and it’s really interesting."

Some tweets expressed apprehension about the sudden color change:

Still others embraced it wholeheartedly:

Later in the episode, Olivia began to sport other colors as well, such as vivid blue. It seemed, though, that red was set to be the dominant color for the new Olivia.

Considering how important Olivia's black and white wardrobe was to her character and persona, this means more than just a change in costume design. Olivia seemed to embrace the "new year, new you" mantra. Fans will have to continue watching to see what else about Olivia may have changed.