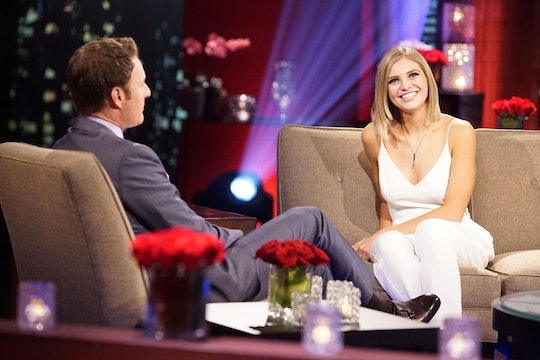 Olivia Should Have Gotten An Apology On 'The Bachelor,' & It's A Shame She Didn't

Olivia had a difficult time on The Bachelor and an even more difficult time on the "Women Tell All" episode. Unlike her experience on The Bachelor — which was usually more of a one-on-one confrontation — "The Women Tell All" proved to be an attack on Olivia via pack-mentality. When one person went after her, they all went after her. Luckily, Olivia was able to stand up for herself on The Bachelor special, or in this case, apologize for her comments and actions while on the show. But, Olivia also deserved an apology on "The Women Tell All," which she didn't get, and that's a shame.

I can't say that I was Olivia's biggest supporter while she was on The Bachelor. I felt that she wasn't there to fall in love, instead she was there to win. Whether she wanted to win fame, or just win the title of being the winner of the season, it felt like Olivia was always competing.

With that said, I can acknowledge that Olivia was treated unfairly by some of the other women on the show. She was clearly the outcast; cast as a villain who only cared about herself (which isn't the craziest thing to care about while you're on a reality show looking for love). Whether her edit was fair or not, she walked out of the show with an immense amount of criticism waiting for her when the show began airing in January. While it is almost impossible to go on a reality show and not face your own haters online, it's truly sad that Olivia had to face such haters in the house. Haters that weren't even critiquing her personality, but instead, women attacking another woman for her body. Not cool.

During "The Women Tell All," one of the twins — I don't remember which one for obvious reasons, but the one on the right — claimed Olivia slut-shammed her for wearing a revealing romper. This is something that is not OK on any level, and Olivia had to face the fact that her words hurt people. But what didn't happen was the apology from the other women to Olivia. There were words said about Olivia's body and her breath that were straight out of Mean Girls, and that is not cool. And for those comments, Olivia deserved an apology.

If Haley and Emily — the two who seemed to lead the brigade in attacking Olivia — felt offended by Olivia's comments, they should have also realized that their words also hurt. Come on, ladies. Olivia had, by far, the most brutal exit on the show (sorry, Emily. It's true.). Let's give her a little hope for humanity.

It would have been nice to see Chris Harrison prompt the women into an apology for Olivia, although it probably would have felt most genuine if it was unsolicited. A few of the women — like Amanda — accepted Olivia's apology and moved on from the past. But others — mainly the twins — didn't offer up any apology on their end, which is disheartening.

I understand that you get the respect you give to others. That is a completely fair statement in these unchartered Bachelor-waters. But, some of the things the women took issue with were mostly just the fact that Olivia was a frontrunner. They didn't like that she stole Ben away from their group dates, or that she would try to steal all of the attention during rose ceremonies. A lot of that, to me, sounds like jealousy.

The attack on Olivia was bullying. Saying she had bad breath was mean. Making fun of her feet was mean. I'm hopeful that there will be some behind-the-scenes apologizing, because Olivia deserves it.