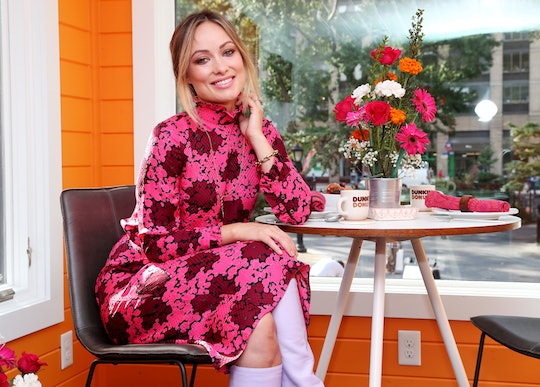 Did you know that coffee is now an energy source? And no, I don't mean in a cup from your coffee shop of choice. I mean coffee grounds are now being used as actual energy — the kind that can keep the lights on in your house, make your car move, etc. Olivia Wilde, an actress, mother of two, and social activist who is always looking for new ways to decrease her family's carbon footprint on the world, explained this to me when we met in Madison Square Park on a perfect fall day. The best part? We met inside a tiny home that was, as I mentioned above, powered by fuel made of 80% coffee oil from used Dunkin' Donuts grounds. During our chat for Romper, we spoke about Olivia Wilde being an eco-friendly mom, keeping the green movement alive, and how she feels the next generation (the one her two children belong to) will be the ones to finally get right with climate change.

When it came to partnering with Dunkin' Donuts on this eco-friendly project, for Wilde it was a no-brainer. "When they told me they were creating the home that runs on Dunkin', and it was gonna be built using limited space, innovative technology, but more than anything, the biofuel made from spun coffee grounds, I was super interested in that," Wilde told me as we sat inside the small, but somehow still spacious, home when it was placed inside Madison Square Park. "I’m always looking out for alternative materials in terms of sustainability in all things — in building, in food, in beauty, in auto-technology, everything." In fact, Wilde had been studying up on alternative fuels, including the idea of using fertilizer as a fuel, long before Dunkin' was making fuel out of it's used coffee grounds.

(Fun Fact: You can now stay in the eco-friendly home, as seen behind Wilde above, by renting it out via Airbnb!)

For Wilde, the combination of coffee and sustainability were a marriage made in Heaven. The concept as a whole left Wilde "in awe of their innovative thinking in terms of the biofuel and as well as the space itself."

When it comes to being eco-friendly in her day-to-day life, Wilde makes it seem almost effortless. During our chat, she casually tells me that Wilde and her family try to use public transportation as much as possible — something that living in New York City has made easy for them. What I notice about how Wilde tells me this is that she's not saying it to boast or with any sense of pride, which shows me she's genuinely trying to reduce her carbon footprint for the greater good and not for the Instagram likes.

"I certainly look for nontoxic materials for everything that goes near my kids, but myself as well. I really try to pay attention," Wilde tells me when I ask how she incorporates sustainability and eco-friendly products into her parenting. As you likely already know, Wilde is the mom to son Otis, 4, and daughter Daisy, 2, with her partner, actor Jason Sudeikis.

Wilde's advice to keep the green movement going and alive? Baby steps. "Thinking about your footprint in terms of balance, and the idea that okay, some things you’re still not fully evolved in terms of materials you’re expending, but you can make up for it in some other way. Or at least an attempt? I always just describe it as baby steps in the right direction."

The more we talk about the "green movement," Wilde reminds me that, once upon a time, many people believed it was just a "phase that moves past us." But it didn't, and as more and more begin to believe that climate change is real, and government agencies like NASA continue to report on it, it's no longer a movement so much as it is a necessity.

As our chat comes to a close, Wilde, who is clearly very passionate about trying to make the world a better place, admits that she believes it's the coming generations that will actually get sustainability right. This includes her son and daughter, Otis and Daisy, who certainly have a great teacher when it comes to saving the eco-system.