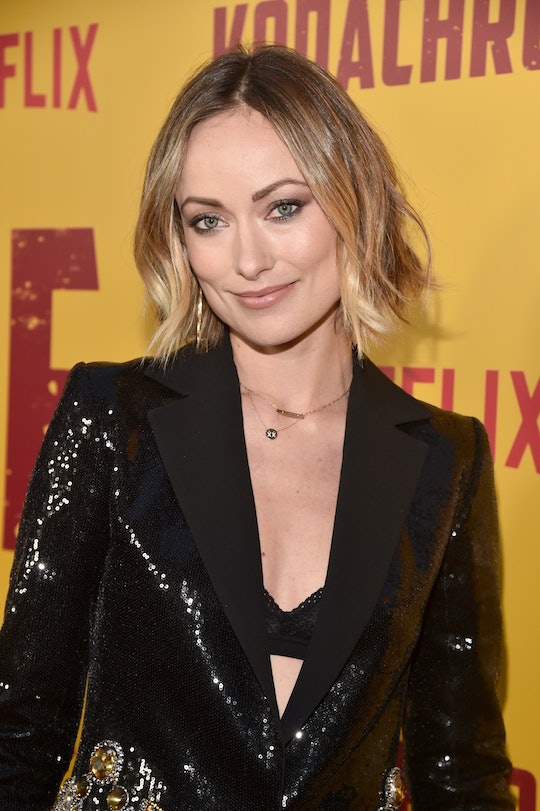 Olivia Wilde Reveals Her Water Broke At A Concert, Proving Labor Waits For No One

As seasoned parents already know, a woman's due date is basically just an educated guess about when her baby will arrive. It's not like she's baking a turkey, suddenly a timer pops out, and *whoosh* her water breaks. Nope. The truth is, babies decide to come on their own timeline; you never know where you might be when contractions start and that trickle of amniotic fluid announces "it's time." In fact, Olivia Wilde revealed her water broke at a concert, proving labor waits for no one.

On Saturday, the actress took to Instagram to mark her son's fourth birthday, People reported. And in her playful acknowledgement to Otis, the 34-year-old mom of two recounted that one time her water broke in the middle of a concert in New York City. “Four years ago today we were at a @jonbatiste concert at Webster Hall in Manhattan, and this little one decided he wanted to come out and join the dance party,” she wrote on Friday, along with a photo of her son holding up four fingers while enjoying a birthday cupcake. "My water broke somewhere up on the balcony. So next time you’re there, think of us. (We obviously stayed til the end of the show. Cuz that’s how we do.) Happy birthday, Otis!!!"

In case you were wondering, Wilde pretty much has the best social media posts on her kids' birthdays. As ET Online reported, when her daughter Daisy turned 1 — on the International Day of the Girl — Wilde wrote:

My curious, courageous one, I promise we'll work hard to make this place better for you and your sisters everywhere. We've taken some hits recently, but I believe we are even more determined because of it. We dream of a time when you won't have to apologize for your brilliance, or sacrifice your self-respect to prove your worthiness. This world is yours, kiddo. We're just the cleanup crew. I love you. Happy birthday. #internationaldayofthegirl

Now back to water breaking in unexpected places ...

In my opinion, a concert isn't necessarily the worst place for a woman's water to break. People around Wilde were probably too distracted by the live music and fellow concert-goers to even notice. You know, unlike that one lady whose water broke while she was shopping at Target. A very pregnant Tanya St. Preux Picault was shopping at Target in September, 2017, when another shopper noticed she seemed to be in pain, WPTV News reported. The concerned shopper got the attention of her daughter, Caris Lockwood, who is a labor and delivery nurse. Ultimately, Lockwood was at the right place at the right time — because she helped deliver Picault's baby just outside of the Target store.

I didn't know she was going to deliver that fast at first, but then she had a really painful contraction and her water broke. As a labor and delivery nurse, I kind of knew what was about to happen.

Or the women who wind up going into labor while on airplanes.

When it comes down to it, parents don't really have a say when or where a woman's labor — or her water breaking — happens. About 80 percent of the time, labor starts with contractions first and then the water breaking, as Parents.com reported. For the other 20 percent, a woman's water breaks first, and is then followed by labor pains within a few hours or so. And in incredibly rare cases, a baby is born en caul — or completely within the amniotic sac, Today reported.

One of my biggest fears the first time I was pregnant was that my water would break in a public place. At the grocery store. While eating at a restaurant. Or *gasp* even while at work. *Shudders* As it turned out, though, my water had to be broken at the hospital by my doctor during all three of my labors. Which was fine by me. Because at least I didn't have to worry about getting my carpet/car/work desk chair covered in amniotic fluid.