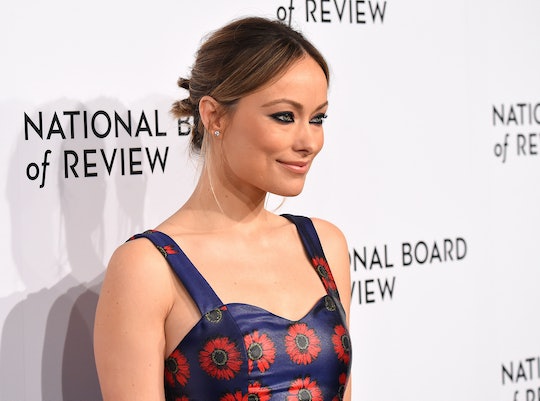 Olivia Wilde's Advice For Balancing Work & Motherhood Is So Simple, But Helpful

For the past four years, actress Olivia Wilde has been working on finding that perfect balance between parenthood and her career. And in a recent interview, she opened up about what mindset has been helping her achieve it. Olivia Wilde's advice for working moms is so simple, but could be exactly what some mamas out there need to hear.

In a conversation with Us Weekly, Wilde explained that taking it all "day by day, step by step" has been the key to balancing motherhood and her acting career. "I think it’s just biting off as much as you can chew, you know, slowly and incrementally. And I think [it’s] knowing what you’re getting yourself into," she also told Us Weekly. Basically, as long as you don't put too much on your plate, Wilde thinks you'll figure everything out.

Wilde also spoke with the magazine about how that mindset helped her when she was directing the film Booksmart last year. (Booksmart, Wilde's directorial debut, is due to hit theaters on May 24 of this year, as per IMDb.) "I just launched into [Booksmart] with kind of reckless abandon,” Wilde told Us Weekly. She added that taking things "day by day" particularly helped her during that busy time.

Wilde and her fiancé, actor Jason Sudeikis, have two children together: Otis, 4, and Daisy, 2.

This is not the first time Wilde has opened up about being a mom to Otis and Daisy. For example, in an October 2018 interview with the magazine Working Mother, Wilde opened up about how she hopes to raise her daughter Daisy to be a strong woman. "You just lead by example. My mom showed me anything was possible. I’m showing Daisy anything is possible," Wilde advised. "Just introduce them to all different types of realities. I think you can’t project anything on to your kids. You have to get to know them for who they are. You have to see them as partially extensions of you but also as people you’re getting to know."

And in October 2015, Wilde spoke with Elle about playing Sarah in the movie Meadowland, which is about a mother mourning the loss of a missing child. As Wilde explained, she gave birth to her first child, Otis, during pre-production for the film — and having a newborn at home while filming scenes as this grieving character made her value motherhood even more. "Going through the process of becoming Sarah and empathizing so deeply with her — and exploring the challenges of grief through her story — allowed me to come out of it feeling even luckier to be a mother and to have my child," Wilde told Elle. "It allowed me to be a bit more present with him and mindful as a parent. I found it to somehow be a positive experience for me as a parent in the end. I just came home and loved him a little more than maybe I would have."

While every working mom's situation is different, Wilde's advice to take things day by day could definitely be helpful for parents who are feeling overwhelmed by the whole trying-to-have-it-all mentality. It's clear that Wilde has found a balance that works for her — which is a good thing, because her fans are certainly excited to see the actress-turned-director's next career move.