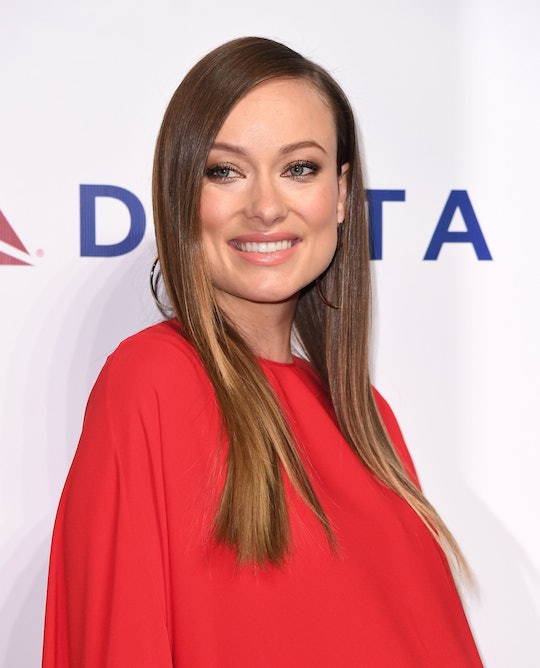 Olivia Wilde's Baby Photo Of Daisy Will Melt Your Heart

Actress Olivia Wilde might be one of the coolest moms in Hollywood. She is funny, she is a terrific actress, and she is mom to two children with her fiancé, actor Jason Sudeikis — 2-year-old son, Otis and newborn daughter, Daisy. Wilde has always had a terrific Instagram, but her newest post, Wilde's baby photo of Daisy, will more than likely melt your heart — because the baby is seriously so cute.

Daisy's birth had been long anticipated for Wilde's Instagram followers, who kept up with her pregnancy through her posts. Her honesty about her pregnancy — from the weird cravings she had to her fears of going into labor at any moment — was refreshing and hilarious. But the pregnancy posts had to come to an end eventually, and on Oct. 11, Daisy Josephine was born — and it was all totally worth it.

Luckily, this has made way for absolutely adorable photos of the newborn — which honestly, might be better than pregnancy posts. On Wednesday afternoon, Wilde posted a brand new photo to her account of Daisy. In the beautiful black and white photo, Wilde is pictured looking at her daughter dotingly, as Daisy curls up to her chest, sleeping. The caption includes one simple emoji to sum up her feelings — the content emoji.

The emoji used in the caption is perfect — both mother and baby look extremely comfortable and happy. Any mother to a 2-week-old knows that the content faces on both mother and baby won't last long — but at least Wilde was able to capture one of the brief moments of peace and quiet on camera. However, given Wilde's previous Instagram post, it doesn't seem like she has gotten much sleep herself. Two days ago, Wilde shared a photo and talked about her "current nocturnal existence" in the caption. On the same day the photo was posted to Instagram, Wilde and Sudeikis made their first public appearance in the days after Daisy's birth. During their walk to get breakfast in their neighborhood, both parents looked fresh faced and glowing — any sign of Wilde's new nocturnal lifestyle did not come across in the photographs. On Tuesday, Wilde was again spotted on a walk with Daisy around their neighborhood — with absolutely no sign of sleep deprivation on Wilde's face. (How does she do it?)

The Instagram photo of both mother and baby is adorable and seriously heart melting. They look peaceful and they look happy — the way that every mother to a newborn wishes they could be all the time. While Wilde's pregnancy Instagram posts were so relatable, her post-pregnancy photos have already proven to be even more of a delight. Bless.