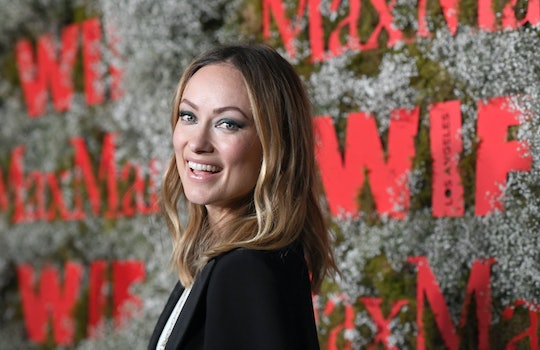 Kids get attached to items very easily, especially when it comes to their favorite movies or characters. It might be reassuring for same parents to know that celebrity children are no exception to this. Like, Olivia Wilde's daughter won't stop wearing her Elsa dress, and Wilde is kind of concerned now.

Unfortunately for Wilde, the "wear one item every day" fixation may never end (or will end when the dress finally rips). Especially when it comes to anything Frozen related. On Friday morning, Wilde took to Instagram where she shared the cutest photo of her two kids with her fiancé, Jason Sudeikis — 5-year-old son, Otis, and 2-year-old daughter, Daisy. In the photo, the brother and sister duo stand on the sidewalk of the Natural History Museum in London wielding balloon sculptures — Otis holds some kind of sword, while Daisy holds a miniature version of herself that is also wearing a blue Elsa dress.

Wilde's kids look so adorable in the photo, and she clearly knows it. But she only has one issue — her daughter won't stop wearing the dress, also known as the same dress that Elsa in Frozen wears when she sings her big number in the movie. "Quick Q: how many times can you wash an Elsa dress before her powers are released, triggering a new ice age, and/or the dress rips?," Wilde asked her followers in the caption of the photo.

Now that is a question that many parents have pondered before.

Luckily, Wilde's Instagram followers were on hand to provide some sort of answer to her question.

"The powers stay strong," one commenter wrote. "Very strong. Stronger when ripped, stained, and falling apart apparently...you're in for a long haul."

"It never actually loses its power, you just ride until the wheels fall off," one commenter wisely advised.

Looks like Wilde might have to continue washing the Elsa dress until her daughter is finally able to physically "Let It Go", or get too big for it. But she isn't alone in her struggles — parents have been dealing with their kids' obsession with Frozen since it came out nearly six years ago in Nov. 2013.

Daisy can be seen wearing that same exact Elsa dress while on a peddle boat in London in an Instagram post on Wilde's account from earlier in the week.

There are a few reasons why young kids are so obsessed with Frozen, according to The Washington Post and it can be attributed to a few things — the magical realism, the music, and the fact that little kids can relate to Elsa. "Her emotions are strong, passionate and seem uncontrollable," according to The Washington Post. "Preschoolers, too, are driven by their impulses." On top of this, Elsa is a pretty empowering, independent heroine. When she puts on that iconic blue dress, she becomes more powerful. Based on this, it's easy to see why kids would want to emulate her.

Of course, kids don't get those same exact powers when they put on their own costume of their favorite character. But, it's easy to understand why they would feel that way. Research has found that kids become emotionally attached to certain objects and outfits because they feel like the objects have a "unique essence or life force", according to The Guardian.

Wilde (and other parents who can relate to her) will just have to wait until Frozen 2 is released in theaters on Nov. 22 to see if that obsession with wearing the Elsa dress continues. But something tells me her daughter won't stop wearing it any time soon, especially once the sequel is released.