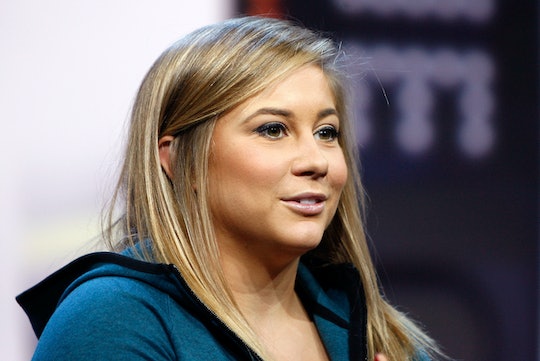 Olympic Gymnast Shawn Johnson Does Her First Back Flip While Pregnant

Gymnast Shawn Johnson is known for doing some serious flips during (and away) from the Olympics. And now that the Olympic gymnast is pregnant, things aren't going to change. Some people might be surprised to watch Shawn Johnson do her first backflip while pregnant, but rest assured, she's a seasoned professional when it comes to these things.

People might be used to seeing Johnson "flip out" on their TV screens. The gymnast competed in the 2008 Beijing Summer Olympic games, where she earned one gold medal and three silver medals for her incredible talent. But, over the weekend Johnson flipped out in a brand new way — with a pregnant belly. The former gymnast took to Instagram to share one very fun video of her returning to her old stomping grounds. Sure, people may be used to seeing her do some serious moves in the past, they've never seen her like this.

In the video, Johnson can be seen grabbing her pregnancy bump while jumping on a trampoline inside of a gym. "I wouldn't do any flip...," someone says from behind the camera. But without warning, the former gymnast launches herself into a perfect backflip and sticks the landing. Johnson's smile on her face says it all — she's still got it. "Baby's first flip," she wrote in the caption of the post. "I peed myself a little hahahaha." Get used to it, girl.

Although some people might be a little shocked that Johnson would attempt to do some gymnastics while she is pregnant, most of the commenters were super supportive of her.

"Mama's still got it!," one commenter wrote.

"Moms out there killin' it," another commenter added.

People should trust her. Sure, it might look a little scary to everyone else but Johnson is a seasoned professional at this point. After winning the gold in 2008, she retired from the sport in 2012 due to injury, according to CNN. Some doctors might warn against pregnant women doing gymnastics for obvious reasons — if something were to go wrong, the baby or mom-to-be could face some serious injury. But since Johnson has plenty of experience in doing gymnastics there really is no need for anyone to worry — she clearly knows what she's doing.

Just one month ago, on April 4, Johnson took to Instagram to announce that she and her husband, Andrew East, are expecting their first child together after she experienced a miscarriage, according to Entertainment Tonight. And in an Instagram post, a few weeks later, the mom-to-be revealed that she is currently in her second trimester. So, she has just a bit more time to go before her little one can start doing gymnastics on their own instead of in the womb, but it doesn't seem like Johnson minds at all.

Since her big announcement, she's been open about how much she loves being pregnant and how excited she is to become a mom for the first time. In April, Johnson revealed to Us Weekly that she's been experiencing aversions to avocado, has been craving pretty much anything, and is still trying to stay active by working out a few times a week. But clearly she took "staying active" to a whole new level over the weekend when she decided to show off her gymnastics skills (again) to everyone.