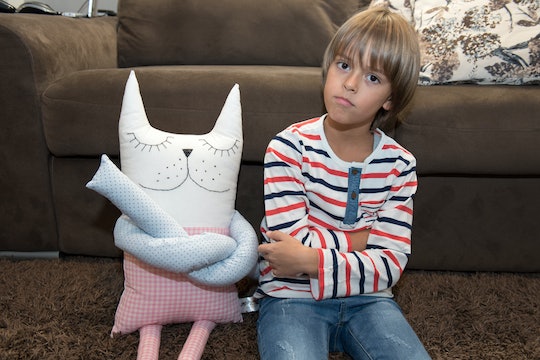 Children Supplemented With Omega 3s Were More Zen, & So Were Their Caregivers, A Study Found

Discipline and long-term parental reinforcement can seem like the slow road to better-behaved kids if you've trawled the endless articles and help sites for advice on child development only to read "they'll grow out of it." If only there was a magic pill, you think. Well, according to a new study, omega-3 supplements may improve kids' behavior, with decreased levels of aggression observed among the study's participants.

Researchers examined the effects of omega-3 supplements on children's externalized behavior in a study published in the journal Aggressive Behavior, and reported on by Big Think. Noting previous studies that show improvements in a child's behavior have positive impacts on a caregiver's behavior, the scientists essentially wanted to see if omega-3 supplements could result in children acting out less, and effect a lower incidence of caregiver violence or maltreatment as a result.

Researchers gave a fruit juice with omega-3 supplements to one group of children and a fruit juice placebo to another. The children, parents and caregivers, and research staff were all blind to which children were receiving the placebo.

The results showed that children who took the omega-3 supplements not only had decreased aggression and improved behavior, but those effects tended to encourage less fighting and bickering among the adults caring for them. In other words: happier kids, happier family.

Omega-3 fatty acids are crucial to a healthy diet, with a range of functions, from energy to cell repair, per the CDC. Long associated with heart health (a claim challenged this week by research by the National Insitute for Heart Health), they are popular dietary supplements — you've most likely seen fish oil supplements in your supermarket.

Downing fish oil isn't any adult's idea of a good time, though, let alone a child's, so there are plenty of other ways to introduce more omega-3s into a kid's diet. Eat Right suggests some of the following food, known for being rich with omega-3 fats: salmon, sardines, fresh tuna, trout, shrimp, beef, flaxseeds, walnuts, chia seeds, and soy beans.

It can be tricky to get some kids to enjoy fish, but flaxseeds, walnuts, and chia seeds can all be used in baking recipes. For vegan recipes, flaxseeds or chia seeds are commonly used as egg substitutes for the avid bakers out there. However, for non-vegan and vegetarian families, Eat Right also notes that eggs, juice, milk, and yogurt are commonly fortified with omega-3 fats.

“This is a promising line of research because omega-3 fatty acids are thought to improve brain health in children and adults. There is more to be learned about the benefits, but if we can improve people’s brain health and behavior in the process, that’s a really big plus,” said Jill Portnoy, an assistant professor in UMass Lowell’s School of Criminology and Justice Studies, in a press release.

It might seem odd that this study was lead by a crimonology professor, but it actually ties into larger conversations around crime prevention. As people continue to debate nature versus nurture, this study helps highlight how the actual foods and nutrition you have access to may shape you growing up.

"Biology and social environment interact in complex ways that we’re just beginning to figure out," Portnoy said in the press release. "Before we can design effective interventions, we need to do research to understand what’s happening.”

The link between omega-3 supplements and reductions in behavioral problems isn't new. In 2015, University of Pennsylvania periodical Penn Today published research pointing to omega-3 as nutritional intervention for behavioral problems.

Hopefully, this study will help build on previous ones so more people understand the importance of nutritional intervention. Food access is a struggle for many families and research like this highlights why it's so important for kids to eat right.