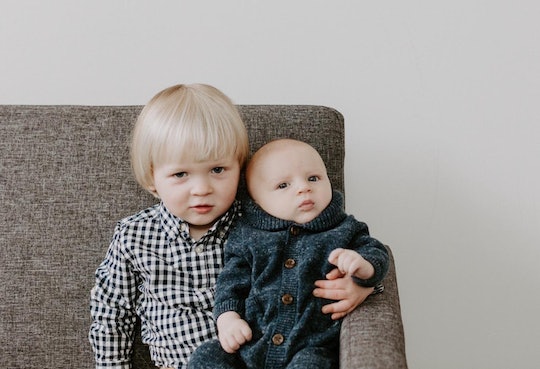 On My Son’s Fourth Birthday, I’m Ready To Talk About His Chronic Illness

Longtime Sesame Street writer Emily Perl Kingsley wrote the essay “Welcome to Holland” in 1987, 14 years after her son, Jason, was born with Down syndrome. In it, she offers a metaphor: preparing to have a healthy baby is like planning a fabulous vacation to Italy; birthing a baby with a disability is like discovering that you’ve unintentionally landed in Holland. This is not the place you planned to go. It is not the dream you so often dreamt. It’s not the story you told yourself… or anyone else.

On April 16, 2016, our firstborn, William Leo Gallagher, came into the world. And he was perfection. Two weeks early. Seven pounds even; my lucky number. Pure bliss.

By the end of his second day of life, though, we knew something wasn’t right. Will’s circumcision site still hadn’t begun to heal. When his Hep B shot site started to bleed again at 8 p.m. that day (more than 24 hours after it was administered), the alarm went off.

We were supposed to be sending out a text and social post reading: 'mother and baby are healthy and doing great,' not meeting with specialists in the neonatal intensive care unit.

For the next few hours, doctors and nurses frantically examined our little William; unclear, uncertain, unresolved. They took him from his bassinet next to my bed to the nursery and then, the NICU. My husband Brian and I were told to go back to our room — eight floors away from him — to wait for the results of all the tests they planned to run. They would call us with the answer.

When you are told by a medical professional that someone will call you with the results, but the news is actually being delivered in person, the dread you experience as they walk towards you feels like the oxygen has been sucked out of the air. Time stopped. We braced ourselves: Our perfect little angel had an imperfection. Will had been diagnosed with Severe Hemophilia A, a genetic bleeding disorder caused by the absence of Factor VIII, a clotting protein, in his body. If you’re reading this, you likely have Factor VIII and don’t think twice when you cut your finger or trip and fall or grow taller or get stronger or simply live your life — all actions that cause you to bleed internally and externally, to varying degrees. I can make this assumption because there are only 20,000 people living with Hemophilia in the U.S.

We were devastated. And terrified. We knew nothing about having a newborn. We knew less about raising a hemophiliac. We had arrived, as Kinglsey put it, in Holland.

What we knew of hemophilia, we had only heard from stories like that of Ryan White, an American teenager from Kokomo, Indiana, who became a national poster child for HIV/AIDS in the United States after becoming infected from a contaminated blood treatment, then being denied re-entry to school.

We were supposed to be sending out a text and social post reading: “mother and baby are healthy and doing great,” not meeting with specialists in the neonatal intensive care unit; receiving a crash course on our three-day old baby’s bleeding disorder that he would live with for the rest of his life. To deepen my guilt, the mother is the one who passes the hemophilia gene.

This was my fault. I had failed.

I thought I did everything right. I bought all of the books. I downloaded the apps. I did the research. The assumption made by medical professionals without any scientific evidence was that I was a carrier of the hemophilia gene. I had an ER nurse say to me while we were sitting with an injured, bleeding, 13-month old, “what did you do during your pregnancy to cause this?” At a friend’s wedding a doctor learned of Will’s hemophilia and turned to me in between sips of champagne to say, “Oh. So, it’s your fault.”

These moments stay with you forever.

Will’s genetic disorder was a result of a spontaneous mutation in utero. That’s a fancy way of saying it was a fluke.

I was tested to determine if I was a carrier, and the results came back negative. My reactions were mixed. I forgave myself for the role I thought I played in his condition. I also felt deep sadness and shame for blaming myself in the first place — for blaming any mother who is a carrier of the gene and births a boy into the world. How unfair, unkind and unreasonable to cast judgment. But, don’t we do this to ourselves as mothers every day? For anything and everything that goes wrong for our children, we feel guilt at what we could have done to prevent it and protect them. It’s an unwinnable game.

Will’s genetic disorder was a result of a spontaneous mutation in utero. That’s a fancy way of saying it was a fluke. So even with all the precautions I took when pregnant, rules I followed, care I took, things still didn’t go perfectly. So, maybe all the stress and pressure isn’t actually worth it. I’ve come to accept this more and more in other aspects of my life. Perfection is exhausting. And focus on it gets in the way of all the little things that actually make up a life well-lived.

The past four years have been a roller coaster. More medical visits — planned and unplanned — than we ever could have dreamt. Trips to the ER for bleeds and cuts and falls and injuries. Trips to the hematology unit for labs and intravenous infusions and clinics. Study drugs and research and risks and projections. Traumatizing for Will. Traumatizing for us. And when I say “traumatizing,” it’s not hyperbole. Parents of medically fragile children are four times more likely to experience PTSD. We are subject to “clinical burnout” at almost twice the rate of other parents, per a 2010 Acta Pediatrica study.

And until right now, four years later, neither Brian, nor I, have ever publicly posted about Will’s hemophilia. We’ve been intentional and protective about only sharing this information with those who need to know or those with whom we’re ready to experience the whole story — one that can be emotionally draining and raw to retell. We never wanted it to define him. We wanted his personality and intelligence and humor and feistiness to lead… not his chronic illness. I don’t think we wanted it to define us either.

But the truth is, it does.

This is part of who Will is; it’s part of who we are; and if we’re all going to start “showing up” a little more fully in all the facets of our lives, then this huge piece of *our* life should come out of the shadows. You can’t always see what people are going through. It’s why it is so important to lead with empathy and give others grace.

Will has taught me about resilience and strength and my capacity to do hard things. I am braver than I thought I could be. He is braver than any boy his age should have to be.

But most importantly, our sweet William has taught us that where there’s a will, there’s a way. With him we always find the will to go forward, straight through everything life throws our way. Ironically, April 17, the day we learned of Will’s bleeding disorder, is World Hemophilia Day; a bittersweet, almost poetic, detail of what has become the story of our life.

It turns out, if we had looked closely at our itinerary, we would have seen that Holland is exactly where we were headed all along. It’s where we are meant to be.

April 17 is World Hemophilia Day. To make a donation to the National Hemophilia Foundation, go here.