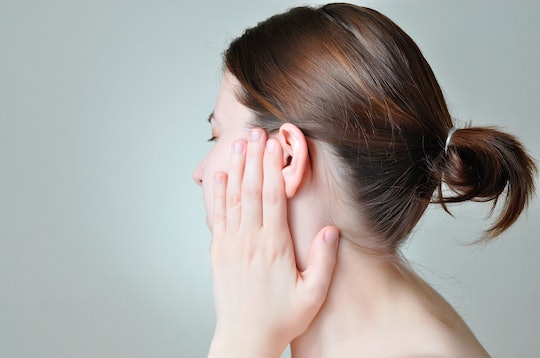 Once You Have An Ear Infection, Do You Get Them For Life?

Ear infections can feel like the never-ending story of maladies. And those prone to the ailment may wonder, once you have an ear infection, do you get it for life? These infections can seem immune to many treatments.

To begin with, it's crucial to understand ear infections and their potential dangers. According to the Mayo Clinic, an ear infection is caused by the presence of bacteria or viruses in the middle ear, often when the surrounding area is swollen from a cold or an allergy. Although these are a common infection, especially in young children, they do present potential dangers. As further explained by the Mayo Clinic, more severe cases of ear infections may even result in hearing impairment and speech or developmental delays in children.

For most cases, fortunately, ear infections are a common and rather mild issue. Most ear infections will clear up on their own, according to WebMD. In some instances, children under the age of 2 will be prescribed antibiotics to make the infection clear up more quickly and prevent complications, as further noted in WebMD. But for many cases, treatment may be as simple as a warm washcloth on the ear and an over-the-counter pain medication.

Thankfully, there are many treatment options for chronic ear infections. The first line of defense is a round of antibiotics and/or ear drops, according to Healthline. If this is not sufficient, however, then it may be time to consider surgical options.

Granted, the idea of ear surgery might make you clench up and cringe. But by most accounts, it is a rather routine procedure. According to KidsHealth, small tubes are placed inside the eardrums, promoting ventilation and pressure equalization. Again, this procedure is super common: around 2 million children get tympanostomy tubes placed each year as a way to treat chronic ear infections, as further explained by KidsHealth. Generally, this surgery is an excellent option to make those awful ear infections hit the road for good.