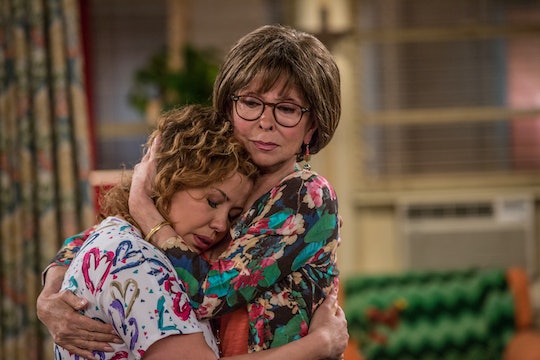 'One Day At A Time' Tackles Issues You're Avoiding

Times have changed since family sitcoms of the '70s and '80s were on air and available for full family consumption. The issues of then are completely overshadowed by the topics of now, which makes it kind of hard for families to find shows that can encapsulate those important teachable moments in relevant context. The topics that the original One Day At a Time covered (airing from 1975-1984), while accurate for the time, do not necessarily speak to the audience that is consuming TV now. That is, until Netflix's new series One Day At a Time, where hard conversations are brought to the forefront.

Sure, you can watch this, that, and the other show at 8 p.m., 9 p.m., and 10 p.m. to catch some a serious convo or two happening between parents and and children. But, the magic with One Day At a Time is that it's happening now. Streaming all at once for you and your family to indulge in. Because sometimes things aren't cut and dry, and sometimes you have to deal with more than one tough issue in life, which is exactly what One Day At a Time accomplishes. What's so unique about the new sitcom is that it does it in a way that allows viewers to perhaps start their own conversation. It eases into topics that are easy to shy away from — the "we'll cross that bridge when we get there" types — but One Day At a Time puts that topic on screen and begins something that is topical and difficult at the same time.

So, what can parents and viewers alike look for in One Day At a Time? Here are just some of "Those Topics" parents may be looking for a little help tackling with their kids.

Elena, who is the most in-the-know and self-aware 14-year-old girl I've ever seen, completely teaches her Cuban-American family about modern-day sexism. As women today know, it's "subtle" — more about "micro-aggressions" and the dreaded "mansplaining." The moment of Elena explaining mansplaining — no, not manscaping — to her grandmother is lightened a bit by the addition of a mansplainer himself who doesn't even realize what he is doing. It is a great moment for families to empower their daughters and teach them that their voice is heard and just as important as anyone else's.

Penelope Alvarez, a veteran who served in Afghanistan, lives with post-traumatic stress disorder and her mother (Rita Moreno). In one scene, her mother, Lydia, soothes her after a nightmare wakes her up. The moment is sweet, but also important because it not only shows that these issues can impact people at any age, but also that that comfort zone of family is there for you when you need it.

Lydia can be a wonderful comedian in the show. (At one point, she describes herself as the iPhone of her time.) But, her story is very important; a young girl coming to a country where she didn't know the language, where she didn't know anyone, and was taking care of her family. It's touching and important to not only share with younger generations in her family on the show, but also generations who will grow up in a world where immigration is one of the most important topics we'll be facing.

At one point in the series, Alex wants new sneakers. Penelope is fine with that, as long as they are under a certain amount of money... and last him the entire year. Alex is beside himself and asks if the family is poor. The question, while dramatized for comedic effect, is something that definitely comes up in households. How do you answer it? That's an answer that will be different for everyone, but the fact that the series is willing to go there is hugely helpful to get the ball rolling.

Elena's coming out is done in a way that will absolutely get an important conversation started with families who watch this show together. Throughout the series, Elena's sexuality is not the focus of the show. In Episode 7, she comes out, and each member of her family has a different reaction. Lydia is her biggest cheerleader; Alex doesn't get it, but also doesn't see the big deal; Penelope has the toughest time with it.

The honest reactions are sure to hit home with families that do feel find themselves having conversations about sexuality with their kids. No matter what, the show is full of love for Elena, which is the most important aspect to her coming out storyline. Plus, One Day At a Time allows Elena to live a true and honest story. The show doesn't make her a victim of stereotypes of generalizations, which is incredibly refreshing.

Religion is something that families tend to share. But as generations grow, so does the mindset behind religion. What is most exciting about this particular storyline is that the different mentality in "skipping church" (a conversation that occurs between Penelope and Lydia) is happening with an older generation, proving this conversation can happen with any members of the family, but regardless, it's important to hear people out.

Equality is something we should fight for. Period. In One Day At a Time, Penelope learns that a male colleague (with the same job) is making more money than her. Of course this is something that comes up in society a lot. Women are known to make less than men, despite the same work, and it's a huge plague that has hit our country. The importance in this conversation is that equality starts at a young age. If we have discussions like this with kids at an early age, future generations will not have to face this type of inequality.

Thankfully, these conversations are all ready to be discussed after viewing One Day At a Time, with Season 1 currently streaming in its entirety on Netflix.