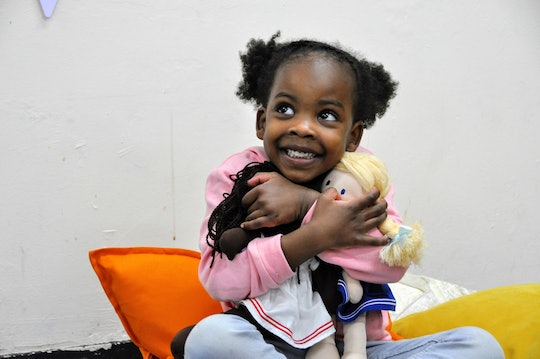 Courtesy of One Dear World

These Diverse Dolls By One Dear World Are So Important

Today's world is increasingly diverse and multicultural, but that's not always accurately reflected in the media we consume, the books we read, or the toys we give our children. Luckily for the less crafty among us, one family has set out to change that: When 2-year-old Alex Tselikas' parents noticed the lack of diverse dolls in the toy department, they decided to create their own toys for their son and his friends. The new company Winnie Mak and Rafael Tselikas created, One Dear World, offers up diverse dolls and a book that shares their stories.

The London-based parents launched their Indiegogo campaign on Tuesday, which just happened to be the International Day of Elimination of Racial Discrimination, and they're aiming to raise just over $22,000 in order to start production. One Dear World's soft dolls include 16 characters from diverse backgrounds, and the company is offering up a set of four dolls in their Indiegogo campaign: Hope (from Accra), Jun (from Hong Kong), Lea (from Oslo), and Parth (from Mumbai). Each doll comes with their own passport, and an accompanying e-book lets children see the four friends go on an adventure through London together.

Mak first had the idea for One Dear World in early 2016, when a playgroup teacher mentioned that their children's reactions were based on their parents'. "Not all children get to see children of different skin color on a daily basis," Mak told Romper via email. "We want children to be able to grow up with dolls that look different from them, so that they can visualize a future where everyone is included."

Mak also feels that it's extremely important for children to see themselves represented in their dolls. "We want to create toys that represent all children, so that they can grow up having a secure self image and appreciate themselves as they are," Mak told Romper. "In the future, we'd like to create dolls with mixed race and disabilities, too, so that all children can be represented and recognize their own beauty."

In a society where parents have to put up with African-American dolls priced higher than white dolls and often have a hard time finding dolls with disabilities, it's a welcome change. And as the world becomes increasingly globalized, it's important to raise children who are open and welcoming of diversity, rather than frightened of it. By giving children diverse dolls who like sports, science, travel, and nature, kids will see a wide range of dolls with diverse interests, many backgrounds, and realistic life stories.

If you'd like to get One Dear World dolls for your own children, the company's Indiegogo campaign is still running. If you back the project, you can start your own collection of diverse dolls and help the next generation embrace a multicultural world.