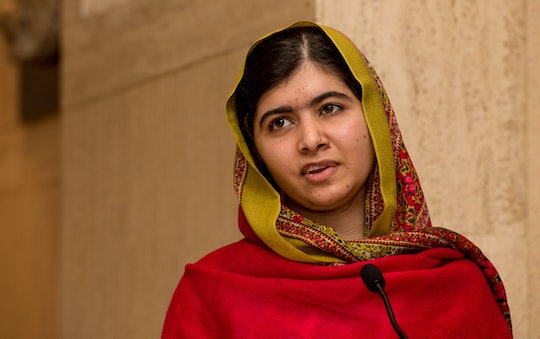 On Tuesday, Nobel Prize winner Malala Yousafzai publicly condemned GOP frontrunner Donald Trump's views on Muslims. While speaking at a memorial event Tuesday to mark the one year anniversary since a Taliban attack killed 151 people — including 134 children — at a school in Peshawar, Pakistan, the always insightful Yousafzai stated Trump’s ideas are "full of hatred" and “discriminative towards others.” But one of Malala's quotes about Trump summed up in a simple, yet incredibly powerful, statement the problem with Trump's plan, and by extension, his candidacy.

Trump’s anti-Muslim rhetoric has been the center of public debate for months now. He has been likened to Hitler for his Muslim-American database/ID card plans, and his declaration that mosques should be shut down was met with staunch criticism, but many opponents felt his call to ban Muslims from entering the United States was the final straw. Hence why people like French Prime Minister Manuel Valls are speaking out. (Hell, even J.K. Rowling has a pretty unpleasant opinion on the Presidential hopeful, calling Trump “worse than Voldemort.”)

And now Trump has attracted the attention and condemnation of one of the most beloved and respected human rights activist's alive. Yousafzai's whole speech was typically eloquent and intelligent, but one of her remarks about Trump and his proposed ban on Muslims entering the U.S. stood out from the rest:

If your intention is to stop terrorism, do not try to blame the whole population of Muslims for it because it cannot stop terrorism. It will [only] radicalize more terrorists.

In very simple terms, Yousafzai drove home the reality that alienating people, especially on the basis of their creed, race, or identity group, doesn't stop violence but rather incites it.

The 18-year-old human rights advocate went on to say:

If we want to end terrorism we need to bring quality education so we defeat the mindset of terrorism mentality and of hatred.

Yousafzai became the youngest-ever Nobel laureate in 2014, after being shot in the head (and nearly killed) just two years earlier — because she went to school and advocated for girls to receive an education. Despite the attempt on her life, Yousafzai continues to promote messages of love and tolerance, which several Twitter users noted in response to her speech:

Malala for president? If only.

More Like This
Even If Your Baby Sleeps Better in Your Bed, It’s Still Not Recommended
Marie Kondo Gives Up Tidying Post-Kids, Sparking Joy For Moms Everywhere
Soul Ties: What Does It Mean & How To Know If You Have One
Does The FDA's Plan To Limit Lead In Baby Food Go Far Enough?
What Parents Are Talking About — Delivered Straight To Your Inbox