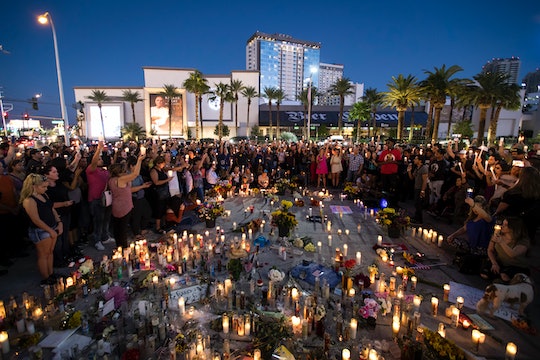 No parent should ever have to go through heartbreak and strife. But after the mass shooting that took place in Las Vegas in early October, dozens upon dozens of parents collectively grieved the loss that occurred that day. In honor of their lives, it is important to hear the stories from their families. Like this mom's, whose daughter survived the Las Vegas shooting and now she's desperately asking legislators to change gun laws.

The mom, only identified as Anne M., wrote to her local Illinois representative after her daughter suffered trauma after surviving the shooting at the Las Vegas music festival, which left 58 dead and more than 500 wounded, according to HuffPost. In the letter, Anne M. pleads with her local lawmaker, Rep. Ryan Spain, to reconsider gun safety laws after what her daughter went through, according to HuffPost. The letter, shared with the outlet, reads in part:

As you are gathering with your family these holidays, I ask that you remember us and all the other families that have suffered losses due to gun violence. Reflect on the power and responsibilities that your office entails and be prepared to act for positive change when the new legislative session begins. ... We have allowed assault rifles to become weapons of mass destruction in our everyday lives ... Our schools, hospitals, concert venues and churches are now all battlefields.

Her daughter, only identified as "Hannah," told HuffPost that, although she was not hit by a bullet, the trauma she suffered will stay with her for the rest of her life. "In many ways I feel like every bullet that didn't physically hit me, because none of them did, all hit me mentally and emotionally," she told HuffPost. "If you could do a fictitious scan of my head, it looks like Swiss cheese, because they all went through me on some level."

Anne M. and Hannah's stories are so important to the conversation about gun safety and remembering the events that took place that evening where a gunman senselessly opened fire. Yet, in the wake of the shooting, not much has taken place. Legislators have made little progress on major gun safety legislation, according to Business Insider, and the push to implement tougher background checks has fallen to the wayside.

That's why letters to legislators, like Anne M.'s, and stories like Hannah's are so important for people to tell. When survivors share their stories, and parents share their grief, they help make the situation — and the desire for change — something seem all the more real. But Anne M. is definitely not the first parent to speak out about the Las Vegas mass shooting since it occurred in October.

High school teacher and mother of two, Nicole Schubert, who survived the shooting wrote in an essay on Scary Mommy that she fears for her life and the life of her children every single day since. "I am scared," Schubert wrote. "I will never feel safe again in a large crowd. I will never attend a concert or sporting event. I am forever changed." In her essay, Schubert calls for taking actions to make it harder for people to obtain guns so senseless acts of violence don't happen again.

The victims of the shooting have been remembered by their own family members, paying tribute to the ones they lost in different ways. The parents of victim Jordan McIldoon told the Canadian Broadcasting Corporation a heartbreaking statement: "We only had one child. We don't know what to do."

Mom Doris Huser was attending the concert with her children, 8-year-old daughter Cordelia and 5-year-old son Aden, when the gunfire broke out. They all survived the shooting after escaping to a nearby hotel, according to TIME, but the trauma of the evening still remains. "I know they'll never be the same as they were on Saturday night," Huser told the publication after the shooting occurred. "I know seeing something so terrible will be like taking a chunk from their childhoods. But I want them to have no worries."