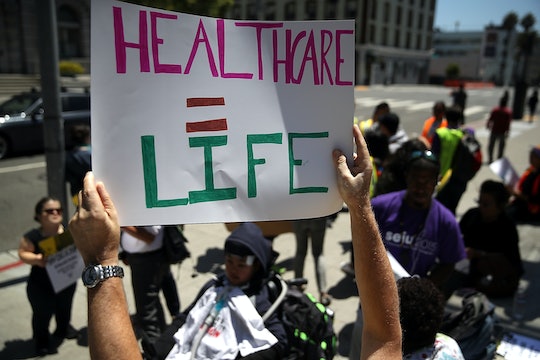 Mom Responds To BCRA With A Moving Message About Her Son

The official, long-awaited unveiling of Senate Republicans' proposed health care bill last week launched the latest chapter of nationwide debate over the contentious, literally life-altering (or life-threatening) issue. The Better Care Reconciliation Act of 2017 (BCRA), more commonly known as Trumpcare, would decimate the existing health care law and potentially make care unaffordable for some of the most vulnerable Americans. Still, getting bogged down in the baffling policy of it all can make this elimination of key provisions of the Affordable Care Act, of Obamacare, feel oddly abstract. That's why one mom's response to the looming Trumpcare bill is so crucial: By sharing the story of her young son's illness and the role his insurance plays in his ongoing care, Ali Chandra provided a heart-wrenching reminder of what's at stake beyond Capitol Hill.

The Senate's version of the American Health Care Act (AHCA), which passed the House in May, would gift the super rich with gargantuan tax cuts. It would do this at the cost of making care effectively off-limits for patients who need it most — like Chandra's 2-year-old son, Ethan. Ethan was born with a rare genetic condition called heterotaxy syndrome, and the New Jersey toddler has had a mind-blowing four open chest surgeries to address the resulting malformation of his heart, according to BuzzFeed News. And the bill for the most recent open heart surgery came in as the Republican architects of the BCRA propose to endanger the Obamacare provisions that have quite literally enabled him to survive.

Chandra shared it on Twitter in a moving, enraging thread that has since gone viral.

As she pointed out in the thread, posted Friday, the bill for that surgery and associated hospital stay and medical care would have well exceeded $200,000 if the family did not have insurance. Because they do, they were responsible for only $500.

According to CNN, the BCRA, if passed as is, would empower individual states to waive the Obamacare requirement that insurers cover 10 "essential health benefits" — and that includes "treatment in the hospital for inpatient care." The Chandra family relies on this current rule to make sure that Ethan's needs are met, and Chandra told BuzzFeed that its elimination in New Jersey would impact her son's care. Perhaps even more pertinent to Ethan's situation is that fact that the BCRA's relaxation of essential health benefit requirements could lead to the relaxation of the Obamacare ban on lifetime limits for spending on patients' care for essential health benefits. It's a possible situation that would force the family to "choose between [Ethan's] life and bankruptcy," Chandra told the outlet.

Ethan, who will turn 3 on July 1, also has a number of misplaced organs because of his condition, as well as about five spleens and two left lungs, according to BuzzFeed. He regularly visits a cardiologist, an electrophysiologist, a pediatrician, and an immunologist, Chandra tweeted, and requires five prescriptions daily. The cost of his care exceeded $1 million "long ago."

So, it would be disastrous for Ethan if the BCRA were to pass in its current form and New Jersey opted to reinstate the lifetime limit, as Chandra wrote in two more heartbreaking tweets:

As long as we have him with us (and I hope with everything in me that it's forever) we will need to pay for expensive medical care. A lifetime cap on benefits is the same as saying, "Sorry, you're not worth keeping alive anymore. You're just too expensive."

What could happen to Ethan if his care in the United States were to be disrupted so drastically has the family considering an "escape" to Canada, Chandra told BuzzFeed. That's an option for them because Ethan's dad is Canadian — but it would require the boy to leave his whole team of medical professionals behind. Also, it's a potential solution that's definitely not available for the vast majority of Americans whose very lives Trumpcare has the ability to rock — or end.

After all, the nonpartisan Congressional Budget Office projected that the House version of the bill would cause 23 million Americans to lose their health insurance, according to PolitiFact — and the CBO could forecast even worse long- and short-term damage when it releases its BCRA assessment sometime very soon.