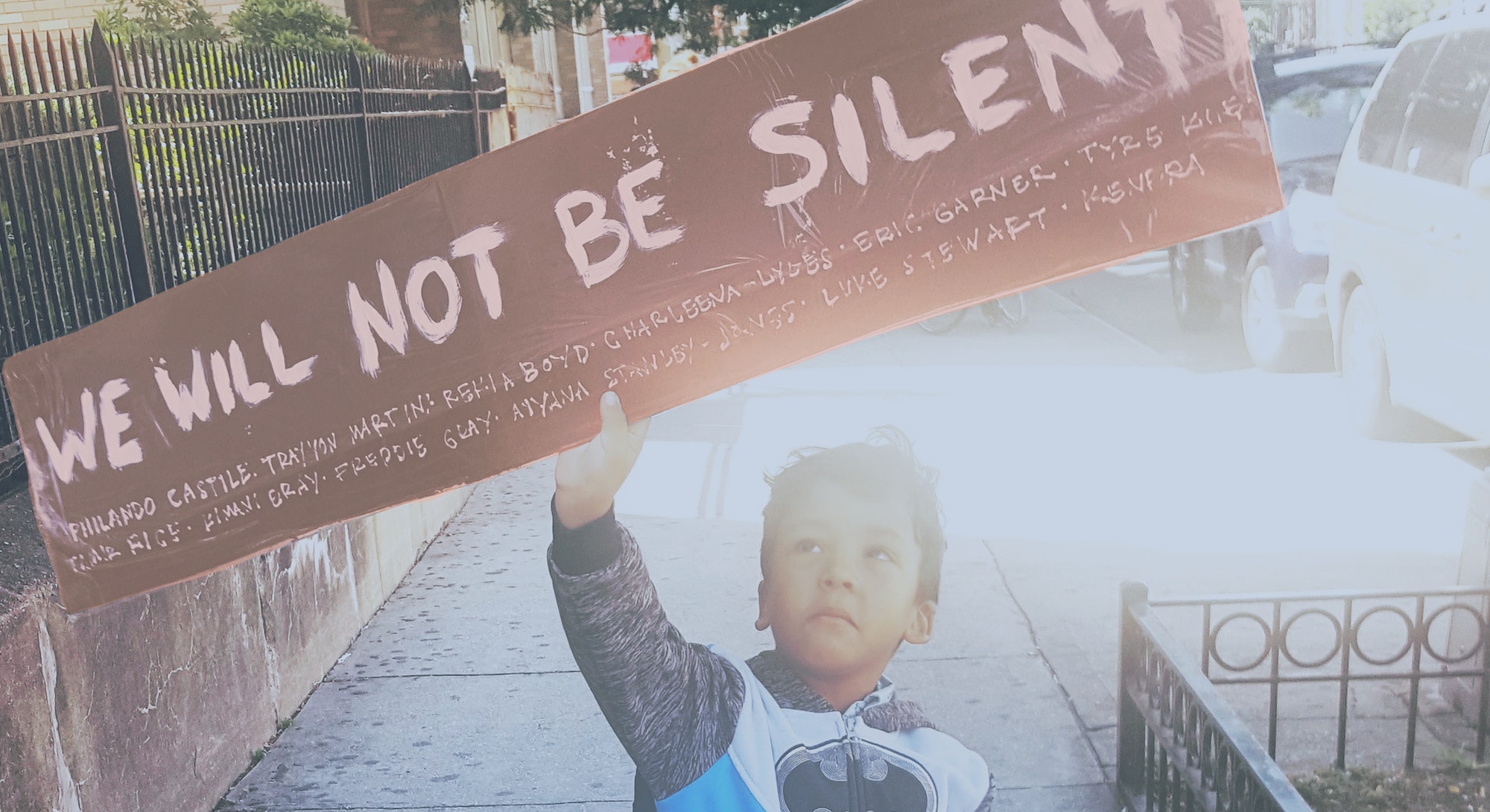 One Mother's Search for The Resistance

The night of the election, I put my son to bed at 9 p.m. as usual. I was wholly uninterested in the outcome, but went to bed thinking that the men in the smoky dark rooms would work their magic as usual, delivering the result to the favored establishment candidate. At some point, I heard someone out on the street shouting in agony. Wide awake, I checked my phone, and saw that the other guy had won. I figured it’d be a repeat of the Dubya years, but as I dropped my son at daycare the following morning it was made abundantly clear that people were seriously distraught. As I grinned at those happy little faces gnawing on wooden blocks, the teachers’ faces were slack with grief and sheer panic for everyone’s future. Talking to other parents in my community, I heard major concern and some entertaining the idea of fleeing the country. As a longtime activist/organizer, I realized it was my time to strike. After hearty Thanksgiving meals and a bountiful Christmakuhwanazaa season I noticed a positive shift — there was a call to arms. “Join the Resistance!” they bellowed, “Rise up and be ungovernable!” Now was the time to put my skills to use.

But how does a working mom and wife with a three-year-old find time to rise up and take to the streets, while making sure the grapes are cut into non-chokable pieces? Where can a radical mom find her people? I went on a journey to find out.

Crowd-Surfing Into A Mass Protest

My first stop in search of The Resistance was the New York City edition of the Women's March. Feeling it would be historic, I brought my husband and my then three-year-old son. My kid was enthusiastic as we walked the first few blocks from Grand Central Station towards the march, but his excitement waned as he watched the thin crowd turn from seemingly normal New York City traffic to a heaving, poster board-waving, knitted-pussy-hat-wearing horde.

As we neared what was meant to be the epicenter of the gathering, I realized it might be a long slog, so I sent my family away with a few souvenir posters that we'd grabbed from the friendly (and highly design savvy!) Democratic Socialists.

During that heady time, I saw an old lady and a few strollers being crowd-surfed out of the throng.

After several failed attempts to meet up with friends, I ended up standing at the intersection of 46th and First for over two hours, hungry and thirsty and with poor cell reception. During that heady time, I saw an old lady and a few strollers being crowd-surfed out of the throng.

At some point, people grew tired and turned to find their way out of the phalanx. When we got over to Fifth Avenue, an enthusiastic bunch decided to hang a right and hoof it to Trump Tower. Realizing all at once that mass protest was not my jam, I hung a left and used that precious childfree time to peruse an enticing sales rack at a delightfully empty Ann Taylor store.

Sitting Down With The Democratic Socialists

Impressed by their graphic design skills and friendliness, I decided to join up with the Democratic Socialists. They held their meeting in a local high school gym. The room was packed to the brim with ragtag millennials in red t-shirts, many of whom were still in shock at Old Man Sanders’ primary drubbing.

Someone responded that there was a lot to be done and they didn't think it wise to waste time wading into the actual definition of socialism.

As I'd expressed an interest in working on issues surrounding women and healthcare, I was directed to the newly formed social feminist group caucus. My motivation and political savvy, coupled with my ability to actually respond to emails in a timely fashion, found me in a group facilitator role.

After several confusing discussions with well-meaning people in the group made it abundantly clear that few — if anyone — in the group had bothered to educate themselves on what socialism actually was, I proposed a reading group. Someone responded that there was a lot to be done and they didn't think it wise to waste time wading into the actual definition of socialism. I thought to roll up my sleeves and provide a history lesson on blacklisting and McCarthyism, but figured it best to be on my way.

I threw away my little red card and went in search of greener pastures.

Shuffling Chairs With The Anarchists

From the socialists, I took up with the anarchists. They seemed a bit more bookish and cool; at the very least they knew what anarchism was. A promising start.

I was a bit taken aback to arrive at the meeting and find everyone dressed up in all-black as though the punk gig would start shortly, but nearly everyone was friendly and approachable. A nice woman dressed in more subdued colors offered to add me to the anarchofeminist mailing list, and I graciously accepted.

The first few lines of the document were fairly standard manifesto stuff; a smattering of class struggle here and a bit of gender analysis there.

One of the first group emails I received from the feminist group was a request to help proofread a document summarizing the anarchofeminist stance. Having worked as a professional proofreader in the past and also having read a decent amount of both anarchist and feminist text, I felt prepared to help out on this one.

The first few lines of the document were fairly standard manifesto stuff; a smattering of class struggle here and a bit of gender analysis there. I also noted that at least one of the people who had been working on this document was not a native speaker, so I tried to clean up the grammar and improve readability. As I reached the midway point, I came across a paragraph informing the reader that this was a polyamorous group committed to practicing orgies and group marriage in order to abolish gender and move towards and trans/neuter future. I wasn't so sure about it and politely suggested removing it from the document since it read a little strange and certainly didn't represent where I was coming from (or up to!). Chaos ensued on the email list.

Sensing there may have been something lost in translation, I figured it best to come to the next in-person gathering and clear the air. As I walked in to the meeting, which was held at night in a small feminist bookstore on the Lower East Side, I came upon a small group of mostly women dressed in the (clearly requisite) black get-ups, sitting in a circle of chairs. In the middle of the circle, a small, cagey woman in dark sunglasses (despite it being inside and nighttime) paced back and forth in the circle like a prize fighter waiting for the next round to begin.

She explained to the group that all she wanted was for us all to collapse into some sort of orgiastic polyamorous embrace and raise our children together, and here I was, some newbie deleting this inspired vision from the Google Doc.

As the facilitator began, the cagey woman took a seat on the edge of her chair and waited as everyone went around the room introducing themselves, repeating names after they were spoken as though she were running them through a database. As soon as I uttered my name, she paused to process it and then pounced on me like a detective solving a particularly beguiling mystery. "It's you!" she exclaimed and then sprung from her seat to begin arguing her case to the unwitting jury of newly minted anarchofeminists.

She explained to the group that all she wanted was for us all to collapse into some sort of orgiastic polyamorous embrace and raise our children together (though it appeared I was the only one with an actual child to offer up to this cause), and here I was, some newbie deleting this inspired vision from the Google Doc. She questioned the integrity of the group and whether she was just too queer and revolutionary for us to handle. As the castigation continued, I looked in the eyes of the other group members, and though they looked apologetic, they were unable to stop the mauling I was receiving at the hands of this shaded warrior for radical post-womanism.

Eventually the little bear ran out of steam and the meeting puttered on a bit longer. I stayed until the end, but soon after quietly removed myself from the mailing list. I guess I hadn't been there long enough to get the membership card. I have a feeling it was black.

Card-Carrying Member Of The Block Association

I'm now quietly working with my neighbors on a block association. At least initially, we found ourselves united against a common enemy: the Cormac McCarthy-esque post office, in which packages have no names and answers are few. So far everyone seems reasonably normal, but time will tell.

Most of my activist experience occurred prior to becoming a mother, so this year has been quite a rollercoaster ride. While my husband is more the type to sit at home watching the news and try to predict exactly which day the world will end, my son has gladly spent countless hours with me at protests, community meetings, and helping me post flyers around the neighborhood.

My son is excited about this third place between school and home where he’s actively encouraged to talk to strangers, question authority, and shout as loud as he can.

My parents were both activists and union organizers, and some of my greatest accomplices have been fellow radical moms. Even when we bring on professional childcare (and this is becoming a requirement for me) for meetings, my son can’t help darting in and out of the room inquiring what we are doing and how he can help. No matter the cause, he’s excited about this third place between school and home where he’s actively encouraged to talk to strangers, question authority, and shout as loud as he can. If I’ve learned anything this year, it’s that we won’t be the ones to save them; they will surely save us.