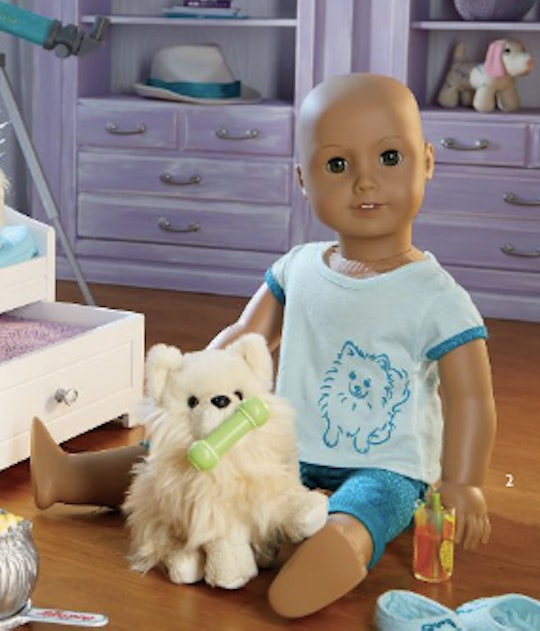 One Mother Explains What Representative Dolls Mean To Her

When I was young, I begged my mother for an American Girl doll. We had a bunch of American Girl historical books in our school library, and the thought of having Addy and Samantha dolls to accompany them was irresistible. While my mother never caved, I've always thought that American Girl dolls and stores must be a magical place for kids. One mother's recent post on Facebook confirmed my thoughts, and she made me respect the company even more by explaining why American Girl's dolls with no hair were so important to her as a parent.

For a long time, most commercially-sold dolls were white, thin, and blond, and most children could forget about having their dolls portray any conditions or disabilities. Now, as companies have realized the demand for representative dolls, and people have realized the importance of equal representation in media, toys, and marketing, the field is opening up: Times have changed, and dolls are now available in a wide array of skin tones and body sizes. However, finding dolls that represent those with disabilities or physical conditions can still be a difficult task.

Mother Meredith Bailey recently shared her own experience on Facebook, thanking American Girl for selling dolls without hair. When Bailey's daughter, Mia, was four years old, she was diagnosed with alopecia, so Bailey was ecstatic when she heard that American Girl created dolls with no hair. In December 2015, Bailey specially ordered an American Girl doll without hair for Mia, who said it was her favorite Christmas present.

However, both mother and daughter noticed something, as Bailey explained on Facebook:

[Mia] did ask at one point why they were not on display at the store. I did not have a good answer to give her. Yesterday, we made our annual birthday celebration with her best friend to the Natick store. On the second floor we hopped off the escalator and there in front of us was a display with doll a without hair! My daughter was ecstatic! Then we saw them in 2 more spots in the store! These dolls were not hidden in the back and had to be asked for. They were there for all to see, especially for my daughter who wondered why they were not out before. This may feel to your company to be 'no big deal', but to little girls who may feel 'alone' and so desperately want to see dolls that reflect their beauty---it means more than you know. I cried many happy tears yesterday. Thank you so much for including ALL children.

American Girl can also outfit dolls with hearing aids, wheelchairs, EpiPens, and diabetes care kits, which is far more representative than most toy companies out there. However, there are plenty of conditions and disabilities that aren't represented by American Girl dolls or other large toy companies yet, and parents find themselves flocking to communities like Toy Like Me in an effort to find representative toys.

Luckily, with more and more dolls that wear glasses, have STEM professions, have facial birthmarks, and carry canes, the doll world is becoming more and more representative. And seeing those diverse dolls prominently displayed in stores? That makes it all even better.