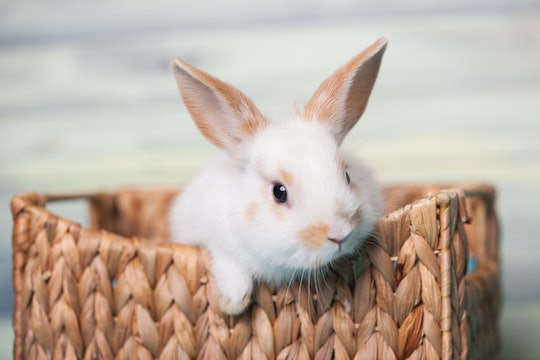 Rabbits pop up in many forms around Easter time — chocolate rabbits, stuffed rabbits, and semi-creepy adult-sized rabbits in shopping mall photo stations. But for some families, the rabbit theme extends all the way to living, breathing baby bunnies, sometimes as a gift for the holiday. But, one pet store won't be selling bunnies until after Easter and it's for good reason. Many bunnies brought home as Easter gifts don't fare so well after the holiday passes.

The Humane Society of the United States reported that rabbits are the third most popular pet in the United States, and also the third most likely to abandoned. In fact, a shocking 80 percent of bunnies purchased for Easter are abandoned, according to HuffPost. In an attempt to lessen the number of bunnies left out in the cold, one pet store has refused to sell any until after Easter has passed. One user on Reddit posted a photo of a sign from the unnamed store's rabbit display that explained the owner's rationale.

These abandoned bunnies often end up in animal shelters, looking for homes all over again. For those who don't make it to the shelters, the Humane Society reported that they are released outside to fend for themselves. Unlike wild rabbits, domesticated rabbits rarely survive for long outdoors. Between predators and risk of starvation, the odds are really stacked against them.

The pet store pointed to the sad fates of Easter bunnies as an explanation for not selling them around the holiday. According to the Reddit posting, the sign read:

We will not have any bunnies available until after Easter. Bunnies sold as Easter gifts to children are the most abandoned animal a month or two after they are brought home and we do not wish to support this.

Caroline Charland, head of the California-based animal rescue organization The Bunny Bunch previously spoke with the New York Daily News about the sale of rabbits in pet stores around the Easter holiday. She explained that although some cities — such as New York, Boston and Los Angeles — have laws in place that keep pet stores from selling rabbits, many don't. “It’s a terrible time of year for rabbits. It’s still a massive issue,” she told the news outlet. These rabbits are often purchased from bunny mills where they are "taken from their mothers much too early and they don’t survive."

DeFeo isn't exaggerating when she says that they are a commitment. Rabbits live eight to 12 years on average and require special care, according to PETA. They should be spayed and neutered, which can get pricey — $100 or more per bunny. Additionally, your home would have to be "rabbitproofed," meaning moving furniture around the house and redirecting electrical wires. While they are often seen in cages, they do best in open spaces with plenty of room to hop around. They need a lot of attention, too. Quality bonding time and weekly grooming sessions are all par for the course with a pet rabbit.

What's more, bunnies are often purchased as gifts for young children but the two don't make a good match. PETA reported that rabbits are particularly sensitive animals, and toddlers can be too much for them to manage. They become frightened when they're held and restrained, leading children to lose interest in spending time with them.

Every parent wants to give their child holiday memories, but pet rabbits are not the way to go. Instead, stick to stuffed Thumpers and chocolate bunnies this year.

More Like This
Keke Palmer Casually Drops Her Baby's Sex On Jimmy Fallon
Freeze! The Single From The New 'Bluey' Album Just Dropped
Josh Duhamel Is Glad He Took Fergie's Advice About Dating After Divorce
Does The FDA's Plan To Limit Lead In Baby Food Go Far Enough?
What Parents Are Talking About — Delivered Straight To Your Inbox