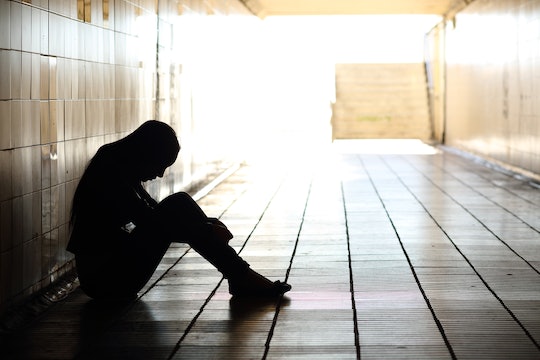 No one should ever have to feel like they're alone, but an overwhelming amount of teens do. In this year, one would expect everyone to have an open mind and be more inclusive towards people who are coming to terms with their identity. Yet, according to a new study, this isn't the case because one-quarter of lesbian, gay, and bisexual teens attempt suicide. But there is a way that parents can help turn these numbers around.

Parents can be one of these resources, and they can help turn numbers around just by supporting their children in their identities and making sure that other friends and extended family members are doing the same. The following ways are suggestions for resources for parents to look into to ensure that their children don't become just another statistic.

Talk To Your Kids & Listen, Too.

The high numbers of suicide can be attributed to bullying in schools, according to Reuters, which is why it is important for parents to talk to their kids and make sure everything is OK. Kimberly McManama, a psychiatry researcher at Boston Children's Hospital and Harvard Medical School told Reuters:

Talk to your kids about their sexual and gender identity early and often. Let them know that whatever they are feeling is OK with you and that you are ready and willing to talk about it with them when they are.

If you're having a hard time understanding what your child is going through, then you can learn more about it. According to Advocates for Youth, parents should challenge themselves and go beyond the stereotyped image that they have adopted about those who are LGBTQ.

The more parents educate yourself about what they're going through, as well as the numbers related to suicide, the more they can be aware of what their child is going through. Sometimes, all it takes it showing an interest and understanding to show your child that you care.

What drives some of these teens to suicide, according to CNN, is the fact that they feel a lack of support, even with societal advancements. At the end of the day, these children want that support, and if they can't get it from their classmates or their government, they can at least get that support from their own parents.

But if parents are having a hard time coming to terms with their child's identity or just need a place to talk out their feelings, there are support groups for the families of LGBTQ individuals, according to Advocates for Youth. PFLAG, or Parents, Families & Friends of Lesbians & Gays, is the largest group in the United States aimed to bring families and allies of LGBTQ individuals together. Their chapters meet all over the country and you can find one close to you. The Family Acceptance Project is an initiative that works with families and their LGBTQ to prevent suicide and homelessness and provides them with resources to do so. Organizations like these can help families cope with what their child is going through.

Praise Your Child For Coming To You With These Issues

It takes a lot for a teen to come out to their parents and requires a lot of courage and bravery. Instead of ignoring your child, according to Advocates for Youth, parents should praise them for their bravery and encourage them to speak up more.

One study, published in 2012, according to The Atlantic, found that love and "social support" from friends and family protects gay children the most from thoughts of suicide. Supporting your child, loving them, and showing that you will do anything to fight for them and protect them works.

Direct Them Towards Resources In Their Schools & Online

While this might seem like a hands off approach, getting involved and looking for resources within their school can save their life. One study published in 2014, found that LGBTQ suicide attempts and experiences with discrimination were lowered when Gay Straight Alliances were implemented in schools. The study was able to conclude that school-level intervention was proven to be an "effective approach" at reducing this risk.

But other resources exist out there in the world that can help them that aren't just in their schools. The LGBT National Youth Talkline can help teens talk through their issues and provide them with the support they need. The Trevor Project also provides teens with the ability to talk to other people and receive support in times of need.

These just skim the surface as to what resources are provided by parents and their children, but implementing any of these could potentially save a life. All parents have to do is just lend a hand when their child needs it the most.