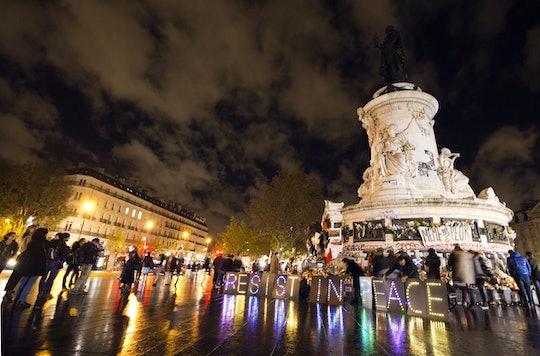 One Week After Paris Terror Attacks, This Is How Parisians Spent Their Friday Night — PHOTOS

And I'm not just talking about joie de vivre when it comes to the country's wine- and cheese-filled culture either. This week, French President François Hollande delivered a speech declaring war with ISIS, but, more notably, he said that France will accept 30,000 refugees within the next two years. He had made the pledge back in September, but after last week’s attacks and the ensuing global conversation about who will and who will not accept refugees, the fact that he reiterated that stance proves just how much France is committed to live and living. It's a very real way to demonstrate the values of the country, and its capital too.

Hollande said on Wednesday in a gathering to the country’s mayors:

Life should resume fully. What would France be without its museums, without its terraces, its concerts, its sports competitions? France should remain as it is. Our duty is to carry on our lives.

And Parisians (and tourists) have obliged. With wine and cheese, of course.

Here are just a few examples of how Parisians spent their Friday night one week after the attacks.

Whether it’s cocktails with friends, or gathering with neighbors to remember the victims, this week Paris proved that truly living can overcome tragedy.

More Like This
What Exactly Are Minions, Anyway ?
Family Of Grandfather Killed In Highland Park Mass Shooting Say He "Saved" Their Lives
Megan Fox Explains Why She Asked Machine Gun Kelly If He Was Breastfed As A Baby
Barack & Michelle Obama Shared The Most Adorable Baby Photos Of Malia On Her Birthday