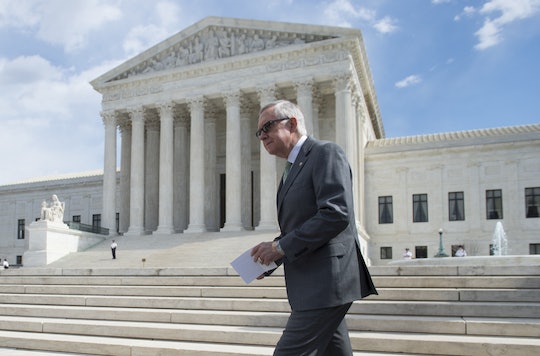 Only 13 States Require Sex Ed To Be Medically Accurate, But This Bill Could Change That

The current state of school-supplied sex ed in the United States is laughable — or outright infuriating, really. Only 24 states across the country mandate sex education, and only 13 of those require that the information provided be medically accurate. A mere 18 states require that students be provided any information on contraception, while 26 states require that abstinence should be stressed. Only two states prohibit schools from promoting religion during sex ed. Welcome to bizarro world. Luckily, the Real Education for Healthy Youth Act, a bill currently pending in the Senate, is trying to clean up the country's deplorable sex ed standards.

The bill has been around for a while, with Democratic representatives vying for it since 2013, but was reintroduced to the Senate by Sen. Cory Booker on Thursday. The act underlines youths' right to a comprehensive sexual health education and is supported by a multitude of LGBTQ, STI-prevention, and youth-oriented organizations.

The act itself aims to support young people's access to information on anatomy and physiology, healthy relationships, pregnancy and STI prevention, dating violence and sexual assault, and gender identity and sexual orientation. It would also require sex ed programs to be medically accurate, evidence-based, and inclusive of LGBTQ students.

The Real Education for Healthy Youth Act would use funding to increase healthy sex ed and cut down on current conservative practices. Currently, funding for sex ed programs that promote abstinence — and withhold information on contraception — sits at $75 million a year, even though federally-funded studies have shown that these programs do nothing to reduce the risk of pregnancy or STIs, according to The Washington Post.

The pending bill would change that in multiple ways. First of all, the act would ban the use of federal grants on sex ed programs that withhold information on HIV, use medically inaccurate information, or exclude information for LGBTQ students and sexual abuse survivors, according to Slate. Second, it would provide grants for teacher training and actual, comprehensive sex ed programs across the country. Doesn't the thought of that make you just breathe a sigh of relief?

While the bill's long-standing presence doesn't make its success promising, it's desperately needed. Research by the Guttmacher Institute shows that more than 40 percent of teens age 18 to 19 know "little or nothing" about condoms, and 71 percent are unaware or know very little about birth control pills. In light of numbers like that, is it any surprise that the U.S. suffers from the highest rate of teenage pregnancy and STIs among developed countries? Those numbers should be shocking, but with current legislation, they sadly aren't.

A federal program to begin changing years of miseducation is sorely needed, so keep your eye on the Real Education for Healthy Youth Act. Imagine a country where all 50 states received medically-accurate, LGBTQ-inclusive, comprehensive sex education that's actually been shown to lower levels of pregnancy and STIs — but hey, that'd be crazy, right?