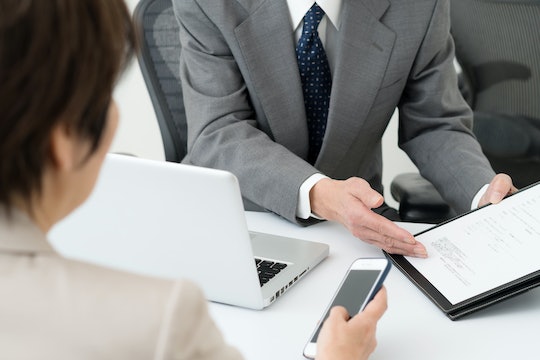 Only *One* Woman Is Among The Highest Paid Execs In The U.S., Because Sexism

While the gender wage gap is still alive and well, women have — in many ways — come a long way when it comes to better representation at work. They're slowly increasing their numbers in STEM fields, raising awareness of gender inequalities in the workplace, and starting more of their own businesses than ever before. But as one new report proves, we've still got a fair ways to go before we reach gender parity in business: last year, only one woman was among the 20 highest-paid executives under 40 in the United States.

Equilar's report showed that, among a group of 20 of the highest-paid young executives in the United States in 2016, only one woman made the cut, according to CNN. Julia Haywood, who was then-vice president of United Continental Holdings (i.e., the company that runs United Airlines), came in 19th place with her earnings of $3.9 million. And yeah, that 19th place? That means she was just two spots away from not even making the list.

Let's put Haywood's earnings in perspective, as well. The man sitting at the top of the under-40 list, Extraction Oil & Gas president Matthew Owens, earned $26 million to Haywood's $3.9. That means the highest paid man under 40 earned more than six and a half times the amount the highest-paid woman did — and that 17 other men earned more than she did, too.

The numbers show that, even among a younger and more progressive generation, women simply aren't climbing the ranks at the same rate as men. And the reason, unfortunately, comes down to gender inequality. As a study carried out by McKinsey & Company and LeanIn.org showed earlier this year, women are promoted at far lower rates than men despite asking for raises and promotions at similar rates.

The further up the corporate ladder you go, the less likely women are to be promoted — so we end up seeing a dramatic disparity between female representation in entry-level positions (where women make up 47 percent of hires) and C-suite positions (where only 21 percent of leaders are female). In January this year, only 29 women held positions as CEOs in S&P 500 companies. Whereas 471 men held those positions.

It's no wonder that LeanIn.org's report found that women are far less optimistic than men about their chances of reaching top executive roles. It's a belief based entirely on reality, even after decades have passed since a more Mad Men-esque mentality ruled the business world.

So why are women in 2017 still doing as poorly as our predecessors did? According to Luca Flabbi, associate professor of economics at the University of North Carolina, it could be due to the career-influencing decisions still being made by older generations. "Even if recent generations may have very different attitudes, frequently the people that decide about their careers and promotions belong to an earlier generation," Flabbi told CNN recently.

Regardless of the reason behind it, it's high time we got rid of the imbalance between men and women in senior roles — and to do that, women and men need to face the inequities in their own organizations and hold their companies accountable for equal hiring and promoting practices. It's going to take deliberate work to get there, but it's work worth doing. (Actually, considering that the average woman will lose out on hundreds of thousands of dollars during her lifetime due to the wage gap, you could say it's work that's well worth doing.)