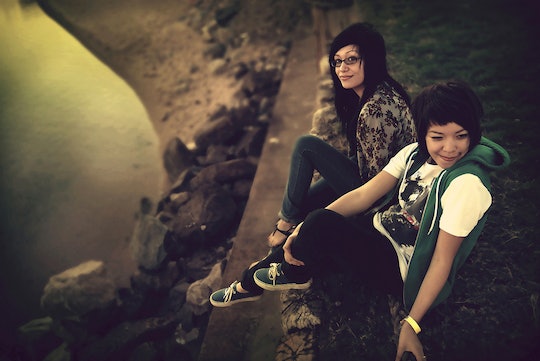 Hey girl hey! What's going on? Hey... Is that my sweater? Give it back! Actually, no, keep it, it looks really cute on you. This? No, it's definitely not your necklace, though I may have found it in your jewelry box and liberated it in preemptive retaliation for the sweater you stole. Anyway.

So, I hear you want to have kids. Well, obviously no surprise there — You've been going on about how much you want to have a baby since before your first period, but it's a delight to hear you voice this desire once again. You're in for some fun times, and I'm not just talking about the act of getting pregnant #rimshot. Kids are fabulous. It's like having puppies, but with less fur (so, like, Chinese Crested puppies). You get lots of cuddles, you have to clean up lots of messes, and they'll probably wind up sleeping in your bed a good chunk of the time.

But you made a mistake, sister dear. Because before you told me you wanted to have kids, you said this:

I know I'm ready to be a mom. Being an aunt has taught me pretty much everything I need to know.

Girl, you're a wonderful aunt. The kids love you and I know you love them. But if I may, just for a minute...

Sister, please. Saying that being an aunt prepares you for having kids is like saying you were ready to run a marathon because sometimes you run 5Ks. Some similar skill-sets are required for both activities, sure, and babysitting and 5Ks both can be hard at times, but parenting, like a marathon, is physically and psychologically a completely different animal.

Yes, you've babysat my kids. You know what you do when you're done babysitting? You give them back. When you actually have kids, you never get to give them back. Ever. You are the "back." I cannot stress what a difference this makes, being responsible 24/7/365 for a tiny creature ill-equipped to handle the world on any level. The best you can hope if you want an evening or (dare you dream) a weekend of freedom is to sometimes foist them on a beloved auntie. And, as an auntie, you can spoil the crap out of them without worrying whether they are going to become entitled little monsters because that's not something you have to deal with. You don't really have to worry about being responsible for their long-term development as human beings. When it comes to aunts and grandparents, rules are meant to be broken. When it comes to parents, rules are there for a damn good reason.

Being an aunt in absolutely no way has prepared you for having a child. So get the thought out of your head. Just go ahead and pluck it out, hold it in your hand, give it a kiss, and then gently blow it away like an eyelash you're making a wish on. To hold on to that thought flies in the face of reason and will frankly embarrass you when you eventually do have kids and realize that I'm right.

But here's the thing: a good chunk of people who have children, maybe even a majority, feel as though something has prepared them for having kids. They're all wrong, too. I was wrong. I thought working as a preschool teacher during college and watching a ton of Supernanny prepared me for having kids. While I was able to rely on some of those experiences as I began my own adventures in parenting, they didn't truly prepare me for what I'd gotten myself into. But other things did. Things I didn't necessarily expect.

Here's what has prepared you to be a mom. An amazing one, actually.

You have a beautiful heart

Even when you're surly and vulgar and doing impressions of Jerry Blank from Strangers With Candy you radiate kindness. It's not just when you're with my kids that I see that.

I don't know how or when you went from the whiny tween who lied in her own journal entries to make her life look as dramatic and tumultuous as she felt it should be based on TV (yes, I read it; you left it lying around, dummy) to someone upon whom her friends, family, employers, neighbors, and other people are animals regularly rely, but it happened sometime when I wasn't looking and I'm proud of you for it.

We were raised by the same amazing parents.

You don't think being a child prepares you for being a parent, but it does, maybe more than anything. You remember the things your parents said that made you feel like a superhero — invincible and strong and special and able to take on anything. You remember the things they did, usually unintentionally, that might have hurt you and you learn in the same way they learned from their parents. Since our parents were awesome, you're in pretty good shape.

Oh, and one more thing.

Even though I once said that you'd probably be like a hamster and eat your young, I don't actually think you would.

Like I said, you have a beautiful heart, and people with beautiful hearts don't eat babies. Also, you seem really committed to this whole vegetarian thing.

I can't wait for you to take on parenting in all your unprepared splendor.

Your Sister, now give me back my sweater, I changed my mind.