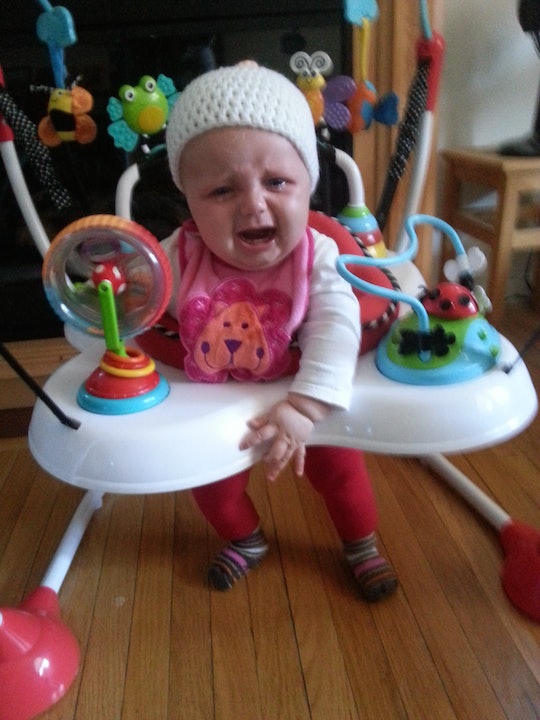 The One Thing Parents Need To Remember During A Tantrum

Dear Man At The Table Next To Ours,

The moment I watched you sit down with your dining partner, I was nervous. I was out with my best friend and my daughter, and my daughter was not in a good mood. She was hanging on by the thread that every parent knows well: the "everything will be fine as long as everything goes my way" thread.

But of course, on that day, nothing went her way. The restaurant was too busy to let her walk around. She had missed her nap, so she was hungry. We considered cancelling our order and leaving, but I convinced myself that everything would be fine. I could handle it. And for a while, I did handle it. I distracted her with toys and crayons, and my daughter made funny faces at people at a nearby table. But as the food took too long to arrive and her patience started to wear thin, I knew a tantrum was inevitable. And I was right.

But even though my daughter was having a tantrum, you, a complete stranger, told me the one thing every mom needs to hear. You told me I was doing a good job. And I can't thank you enough for that.

One of my biggest fears before becoming a parent was that my child would have a meltdown in public. You see, I was one of those jerks who used to roll their eyes at crying babies in restaurants. Just watching other people's children throw a tantrum embarrassed me on behalf of their parents.

Once my daughter was born, the fear of her throwing a tantrum in a public place totally consumed me. To an extent, I even let it dictate where I took her and when. Too often, I refused to leave the house without my husband, parent, or a friend with me, so if my daughter cried (as she was wont to do, being a baby and all), I would have someone to help me calm her down, or to reassure me her meltdown wasn't as bad or as loud or as embarrassing as I thought it was.

Now I have two years of parenting experience under my belt, and I know that my fear of my kid acting out in public is silly, especially compared to the other parenting trials I've faced. I also realize that sometimes I need to prioritize my child's needs over other people's potential discomfort, so I try not to worry about taking her out in public. But when I take my daughter out anywhere close to nap time or meal time, the fear of her losing it is still almost always on the back of my mind.

When my daughter lost it the other day, the tantrum started, as it almost always does, with squeals. High-pitched and grating and intended to make you cringe — which you did. She arched her back, kicking her feet and crying as she tried to maneuver her body out of the high chair. She threw crayons, food, and toys. She even hit me and my best friend, who was at the table with us.

As she kicked and squealed, I couldn't help but let my eyes creep over to yours. I know I'm a 30-year-old woman and I shouldn't care what a complete stranger thinks. But maybe it's that old, childfree jerk still inside me who wonders: "Is everyone else cringing? Are they embarrassed for me? Do they think I have no control over my child? Do they think I'm a totally useless and ineffective parent?"

As I walked my triumphant toddler toward the exit, you said the thing I needed to hear more than anything in that moment: "Good job, Mom."

I know I'm not the only parent who feels this way. We spend so much time apologizing for our children when their behavior falls short of societal expectations, when they aren't acting like "good babies." (What is a good baby? No, really, I'm asking because I have no idea.) But the truth is, they only have limited means of communicating their needs to us, so it shouldn't be surprising at all that they become frustrated when they can't get them across to us.

If there is one thing I could go back and tell my childless self, it would be this: We live in a world that already puts unreasonable pressure on parents. So have a little compassion, both for parents and their children —because if you had no means of expressing what you want, you'd be rolling around on the floor screaming, too.

I spent so much time worrying about what you and your friend might think about my parenting that day that I forgot that maybe you have a baby of your own. Maybe you've raised a few. Maybe you've never had kids, but you aren't quite the jerk I used to be. I stressed myself out so much worrying about what you might think that I never noticed that you didn't care about my baby throwing a tantrum at all.

You did, however, notice that I was doing my best. As I walked my triumphant toddler toward the exit, you said the thing I needed to hear more than anything in that moment: "Good job, Mom." At first, I was a little defensive. Part of me assumed you were being sarcastic and I turned around, ready to engage in a verbal smackdown. But then I saw the smile on your face and registered the kindness in your tone.

I stuttered for a moment, then laughed. "Thanks," I said, and then you were gone.

You probably have no idea the impact you had on me that day. How those three words reminded me that I was doing my best, that my daughter is human, and that yes, I am a good mom.

And for that I thank you.